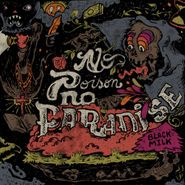 Detroit MC/producer Black Milk is a one-man wrecking crew. His latest solo LP, No Poison No Paradise, features some of the most insane hip-hop production around, with sounds brilliantly cut up, panning back and forth, throwing back without looking back too hard. Songs like "Ghetto Demf" call back to 808-style '80s hip-hop, while a track like "Deion's House" builds off of psychedelic soul, calling to mind The Roots or OutKast. If you feel like Black Milk is more interested in turning knobs than spitting verse (if there's anything to gripe about here, it's that the production is so dazzling it occasionally eclipses the rapping), he enlists underground rappers to liven things up, including The Roots' Black Thought. However, Black Milk also proves himself a worthy MC on the album's second half, which is scant on guest stars yet demands respect from its adherence to detail in both production and verse on tracks like "Perfected on Puritan Ave." In a perfect world, No Poison No Paradise would be the album that pushes Black Milk from in-demand producer to sought-after artist. Check out No Poison No Paradise and be in the know.