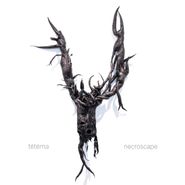 Mike Patton, he of Faith No More, Mr. Bungle, and about a million other projects teams up with electronic artist Anthony Pateras to form tētēma, an experimental quartet rounded out by violinist Erkki Veltheim and Will Guthrie on drums. Necroscape is their second release and, while it's comprised of 13 separate tracks, functions less of a collection of traditional songs and more as an extended suite of nightmarish moods and atmospheres. Though there are undeniable rock elements throughout, the band pulls from all sorts of peculiar sounds and textures to create a disconcerting, overwhelming experience. Pateras himself frames a few of the influences as “Peter Gunn on methamphetamine with RD Burman as co-pilot, being pursued by Madlib through an early '80s London industrial estate.” And that’s just describing one song! A track like “Soliloquy” features what sounds like a malfunctioning synthesizer overlaid with hyperactive jazz drumming. “Haunted” approximates John Zorn conducting a hardcore band. During this sonic maelstrom, Patton unleashes hell with all manner of various howls, screams, grunts, bellows, and chants. It might not be a candidate for easy listening album of the year, but the chaos of Necroscape is a fitting companion to the frightening world outside.