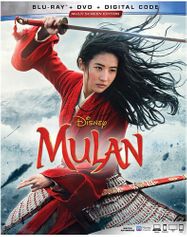 With Imperial China invaded, impetuous Hua Mulan (Yifei Liu) made the choice of donning a man's armor and reporting in the place of her conscripted, infirm father (Tzi Ma). Maintaining her disguise as she distinguished herself in training, will her eventual discovery keep her from a fateful showdown with the warlord Böri Khan (Jason Scott Lee)? Disney's thrill-packed live-action second pass at the heroine of legend also stars Donnie Yen, Gong LI, Yoson An, and Jet Li; Niki Caro directs. 115 min. Widescreen; Soundtrack: English. Two-disc set.