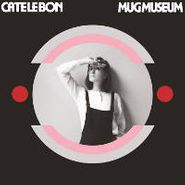 I'm new to Cate Le Bon, an old-school rock 'n' roller who sounds like a more tuneful Nico singing over Television-style guitar interplay, but I'm hooked on her third album, Mug Museum. A closer-in-time comparison might be either Eleanor Friedberger's madcap indie pop with the majestic cool of Charlotte Gainsbourg—not to mention her father, Serge Gainsbourg's, work with singer/actress Jane Birkin, but Le Bon succeeds at hitting on some familiar influences and making them distinctive, forging her icy vocals into singsong melodies and keeping the guitars spare, yet noisey. If anything I've just said sets off some flags for you, I highly suggest checking out Mug Museum.