The King of Marvin Gardens 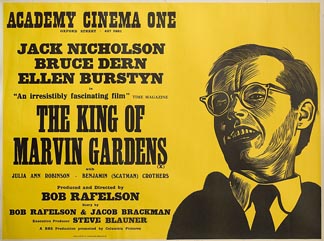 "Get your ass down here fast. Our kingdom has come."

The film opens on a tight, dimly lit shot of David Staebler's face (played by Jack Nicholson). With half of his face obscured in darkness, he breathes softly as he pushes his plastic frames up the bridge of his nose.

He begins a story from his youth. "I promised that I would tell you," he says quietly, "why I never eat fish."

David's story is stark, restrained, and mysterious with the shadows from his fingers dancing over his pensive face. As the story unfolds, it grows darker in nature and yet, the narrator remains somewhat cold. Even more compelling at this point is the fact that the audience is still unaware of David's location. A jail cell? A confession booth? Suddenly a light begins flashing in David's face, simultaneously interrupting him and the audience, bringing both viewer and subject into a common reality.

In the mid 1960s, the American film industry was in a state of flux. While post-war Europe and Asia enjoyed a surge of independent and artistic films, America was slow to change, grounded in the machine that was the established studio system. And with the Vietnam War, civil rights unrest, and an overall shifting cultural landscape, the American public found itself increasingly disconnected from the clean-cut, popcorn fare of big studio films. In addition, the moral-loosening sexual revolution was spreading like wildfire. The spark of change came from a handful of films such as Bonnie and Clyde and The Graduate that pushed moral boundaries and explored taboos. With an air of disillusionment and distrust further enraging the youth of America, the country was primed for more films like these to reflect the voice of this ever-growing movement.

Riding the heels of Beatlemania, the manufactured pop group clones found their own success among the throngs of screaming teenagers, still throbbing from the Fab Four invasion. Inspired by A Hard Day's Night, the Monkees were a made-for-TV band cut from the mop top mold and assembled by producers Bob Rafelson and Bert Schneider in 1966. As the Monkees' TV show and albums exploded to success, so did Rafelson and Schneider. But as interest soon began to wane in the group, their show was cancelled after just two seasons on the air. For Rafelson and Schneider though, this meant freedom and capital to promote and invest in a rising independent film movement. Their first project was a little movie about two bikers on a back roads drug trip across America. Beatnik actor Dennis Hopper's Easy Rider opened in 1969 and struck a profound nerve with moviegoers, financially grossing many times over the film's meager budget. Capitalizing on the film's momentum, Rafelson and Schneider brought in friend Stephen Blauner and the BBS was born.

Named after the first letter of the three men's names (Bob, Bert, and Stephen), the BBS set out to make American art films. After the success of Easy Rider, the major studios were beginning to take notice and began to cash in on the independent movement. It wasn't long then before BBS had a six-picture deal with Columbia Pictures. In their agreement, the BBS would produce their own films with complete creative control and distribute under the Columbia banner, splitting the profits. Living out their rebellious nature, the BBS declined offices at the Columbia Pictures lot (at Sunset and Gower) and instead leased offices on La Brea Blvd. a few miles away. While this quickly became a hangout for free-thinking artists and actors, a type of collaborative was being formed that would spawn a group of films both influential and important to a period that would later be known as the New Hollywood or Hollywood Renaissance. The first of these was Rafelson's Five Easy Pieces, a minimalistic, psychological drama about a classical pianist working as a blue-collar oil rigger in rural California. Rafelson's decision to cast friend and frequent BBS collaborator Jack Nicholson in the lead role would be a turning point in the actor's career. The film was a major success and cemented Jack Nicholson as a bona fide movie star. BBS's other films would go on to varying degrees of success (most notably Peter Bogdonavich's The Last Picture Show), but all would share a common theme—namely, the disillusionment of youth. This disillusionment with government, love, sex, adults, and America continued into the ‘70s with films becoming increasingly bleaker, more gritty, and honest. Three years and five films into their Columbia deal, the BBS founders' interest began to change and the company began to dissolve; its short-lived, but potent existence was responsible for some wonderful and memorable films. One of the last was 1972's The King of Marvin Gardens directed by Bob Rafelson.

The film follows introvert David Staebler (Nicholson) to a rundown Atlantic City, where he meets his older brother Jason (played by Bruce Dern), a charismatic huckster with delusions of grandeur. He is adored and beset on either side by Sally and Jessica, played by Ellen Burstyn and Julia Anne Robinson respectively. Sally is much older than her prettier ingénue counterpart and rules with a heavy hand. The girls are ambiguously related to one another, but stranger still is their mutual romantic involvement with Jason. In their towering hotel suite, David struggles to fit in, and is skeptical as Jason unveils his plans to open a resort on a remote Hawaiian island. What transpires is part plot, part psychological study as the unlikely foursome dreams, schemes, and unhinges in the barren Atlantic City landscape.

The King of Marvin Gardens is a beautiful, stylish film that marries reality with the fantastical. Set within the milieu of the dilapidated boardwalk of Atlantic City (the inspiration for the board game Monopoly), the film fittingly centers around property dealing.References to the game are sprinkled throughout and thematically overarching as the two men seek to score the real estate deal they've always dreamed of. The film doesn't really concern itself with the plans and meetings the two men share, however. Instead, they are treated as set pieces to explore the real core of the film—the relationship of the brothers. Even the accompanying girls, though they play an integral part in the story, are mostly treated as commodities. Shortly after David first arrives, Jason casually offers the younger Jessica to him, seemingly as an olive branch for their burgeoning business venture. To Jason, the girls are paradoxically necessary yet peripheral. This certainly isn't ignored by the girls. Sally lives in a constant state of fear, mostly of being abandoned by Jason. Played with electric volatility, Ellen Burstyn's supporting performance as the unstable matron of the group is nothing short of astounding.

Jack Nicholson is boldly cast against type as the shy, uncertain wallflower. He is apologetic and passive, breaking free from himself only through his radio persona, in which he embodies a wounded, sagely storyteller. David's on-air canards, sparingly and emotionally conveyed, surface throughout the film as his muse oft compels him to privately speak into his recorder. These stories, David's quasi-autobiographical expressions, expound upon his own life with the occasional embellishment for dramatic effect. In Atlantic City, his life with Jason and his showy bravado injects the kind of hyper-realism David normally concocts for his show. He is a reluctant observer, a dreamer. Affectionately dubbed "the Philosopher King" (also, the film's original title) by his brother, David lacks the motivation and fortitude of his brother to move beyond his weekly radio show and out of living with his grandfather. Because of this, Jason is a hero to David. He is everything David isn't and more; and yet, within David lays a distrust of Jason and his frequent grandiosity. Perhaps it is because they are too polarized, too extreme in their corners of personality, that they are unable to achieve success. Rafelson visually depicts their mutual resistance, often framing the brothers opposite each other. The underlying chemistry of both sibling affection and rivalry bounces kinetically back and forth between the two. In fact, great credit must be given to the actors of the film as all of the performances are at once subtle and expressive. The characters are somewhat quirky, larger-than-life figures, and yet the nuances of their relationships and back stories are viscerally felt throughout the film. Rafelson gives the audience small moments with these characters, lingering on seeming insignificant details that round out and complicate them and their emotions. The film feels slow as a result, yet there is always movement towards something either in plot or in character. Rafelson only moves the camera when it’s indoors and even then, the movements are small and delicate. With such a focus on montage, the editing becomes even more crucial for the timing and pace of the film; as a result The King of Marvin Gardens flows quite masterfully.

Laszlo Kovacs' (close friend to the BBS) photography is beautiful. In the middle of winter in Atlantic City, the landscape of the sky, ocean, and city are coldly blue. However, Kovacs lifts these very bright, warm colors to starkly contrast the wintry ghost town elevating it from setting to character. Before casinos had taken over and renovated the beach side town, it had been a former tourist destination in the tradition of Coney Island. By the time of filming, it was a shell of its former, glorious self. Looming hotels and theme park rides run at full speed, yet with no one to occupy them. Populated mostly by retirees, Atlantic City was open for business, but hardly anyone was coming. The result in the film is a type of children's ghost town, a playground for the characters to fantasize in. Bright, primary colors fill the decor of the hotels, giving life to the otherwise empty locale. On the boardwalk, in the middle of the day, a marching band plays down the middle of the wooden path only to, at the sound of a whistle, cease and disperse into various directions. A small antique shop auditions auctioneers, inspiring Jason to try his own hand at some immediate hustling of some widows. Early on, the brothers casually ride horses on the beach in front of a large metal elephant. And all the while these moments occur, circus organ music drifts in the background with nary a child in sight. It is a haunting world, representing the disillusionment both of Americans and the characters in the film.

Rafelson's The King of Marvin Gardens, like the BBS, is oft forgotten among the pantheon of great films from the 1970s. Even among the BBS's other pictures, it is considered a minor work. However, to dismiss it outright is to miss out on a quite remarkable film, stylishly directed with some impeccable screen performances. As the BBS closed its doors, the family went their separate ways, most to continuing and lasting success. Rafelson and company had sought to make films that were different, that spoke to people, and that were honest. No one at the time considered the importance of such a goal or the role they would play in the birth of the New Hollywood. But the BBS had done something significantly profound and artistically novel for a film studio—they made American art. The BBS certainly succeeded in that particular task. Whether or not they provided answers for the disillusionment of youth, though, is another question altogether.