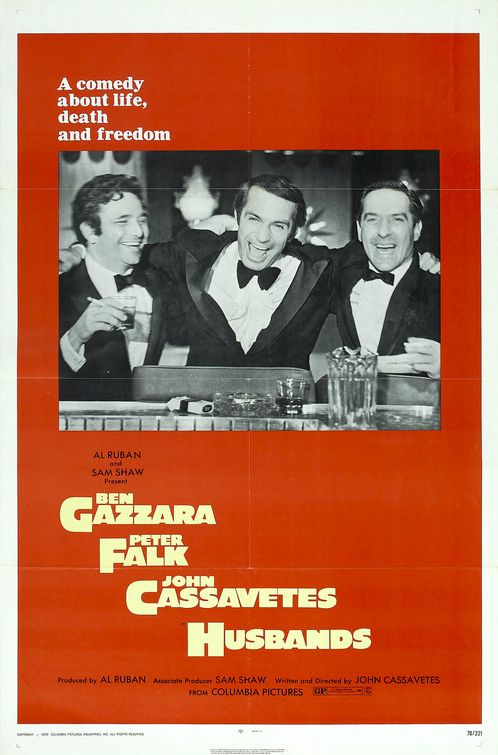 "Like I've been telling my wife for years: 'Aside from sex,’ and she's very good at it, goddammit, 'I like you guys better.' I really do."

—So proclaims Harry, brazenly played by Ben Gazzara in Husbands. This bromantic refrain of love for his two friends characterizes the crass, yet affectionate honesty of John Cassavetes's 1970 comedy about life, death, and freedom.

In Husbands, three middle-aged men, after the death of their close friend, begin to express their discontent with life. After a few days of drinking and carousing, the men fly to London where their bond with each other gets tested against their connection with women. Husbands is a film about brotherhood, about the camaraderie men share with each other, how simultaneously shallow and deep those relationships run, and how the struggle for expression and connection is a lifelong one, feebly attempted by the perpetually childish.

It is impossible to discuss a Cassavetes film without discussing the man behind it. As the spiritual father of American independent film, he was an intensely personal filmmaker who best and perhaps solely expressed himself through the medium. His films have that distinctly raw, unpredictable, and vulnerable energy that make you feel the voice behind them—the experience lying somewhere between the theatre and someone's old 8mm home movie reels. By the end of each film you feel as if you've spent personal time with someone rather than observed them on a screen. His films are not focused on plot or story in the traditional sense, but rather on spending time with characters during turning points.  Writing the scripts for and casting his wife and friends in nearly all his films, Cassavetes explored his own humanity with honesty and courage.

In Husbands Cassavetes reveals his masculine side to us. The film opens with still shots of the four friends flexing topless at a pool party. Not only is it a picture of how these men view themselves, but it's a moment of friendship that can never exist again as it's quickly revealed that one of the men, Stuart, has died. At the funeral, Archie, played by the late Peter Falk, walks alongside Gus (Cassavetes) and makes a shrewd observation. "Lies...will kill you before cancer in the heart," he says. "Lies and tensions" are all people die of.  And with that, they smoke a cigarette and commence the search for truth and looseness.

We follow Archie, Gus, and Harry as they romp through a long weekend of basketball, booze, and Brits. The trio's interpersonal dynamic is visceral, yet understated. Harry, played by Ben Gazzara, is the most dominant of the three. He has a towering, aggressive presence that simmers to the brim of violence.  Archie (Falk) is the more pensive, quiet one packed with feverish opinions. Gus (Cassavetes) is the perennial clown, taking nothing seriously as the giggling arbiter between Harry and Archie's disputes.  All three, however, share the same spontaneous volatility in the film. Their boisterous wills and whims, constantly in flux, spiral out of control. They are, after all, mourning the loss of a friend. But clearly much more is taking place in these men both personally and with each other.

Clearly disillusioned with careers, wives, families, and life in general, the husbands act out in frustration and absurdity their mid-life angst. What exactly is at the core of these characters' actions?  They neither can nor attempt to understand or explain themselves. The answer is in the film, but it is also in the viewer. And what makes Cassavetes's approach both frustrating and rewarding is that he offers very little guidance in his dramatic narrative. Husbands is far from unique in this regard, as every Cassavetes film shares this process. His characters are not facile, readily accessible sketches, but rather emotional expressions. First outlined by Cassavetes in the writing, they were possessed and inhabited by the actors during rehearsals and shooting. In Husbands, the three characters are Cassavetes, but only to a point. Their words may be his, but their emotions and feelings belong solely to the actors. Cassavetes was notorious for directing actors by pushing them to themselves, to answer their own questions. He pushes us, the audience, as well to answer our own questions about the characters. He always wanted to be surprised by the result of his films, to get something that was honest and vulnerable. And he would shoot miles of film just to get it (usually at his own expense).

In the case of Husbands, the result is an all-at-once frustrating, emotional, and hilarious bender. The scenes are long set pieces, some lasting around 30 minutes at a time, with no seeming advancement in plot. At times, it feels as if they are coming apart; that is to say, the film feels like a series of outtakes, with the actors comfortably playing off each other after the take is long over. The first and most devastating example of this is the bar scene, where our husbands sit around a long table with a group of people, each taking their turn to sing a song of their choice. When one unnamed woman sings "It Was Just a Little Love Affair," the three men interrupt and begin chastising her for not expressing true emotion or feeling behind it. Just as Cassavetes would direct an actor, the husbands aggressively push her to herself by tearing down her walls of dignity and self-preservation.They want her to mean her words, not just sing them.The scene is brutal and uncomfortable to watch. And in true Cassavetes style, the actress, unaware the camera was rolling, received the criticism personally. Her efforts and subsequent hurt are honest and pure, performed not as a character, but a person.

After a weekend of drinking, the three return to their homes and jobs, but something has changed. They are unwilling to go back to life as usual. Harry initiates an impromptu trip to London and they all leave immediately. In London, each man seeks to seduce a woman with surprising and revealing results. Their attempts at intimacy with women starkly contrast with the brotherhood they already share with each other. They love and need women, wanting to connect with them, but can only really handle each other. This is the great romance of Husbands – that unique bond men share with each other that supersedes other relationships. The men may not learn or attain anything except the affirmation that they truly love each other. The inevitable loss of such bonds cut as deep as any other human connection, reminding us that men, perennially boys, are always on the verge of loneliness.