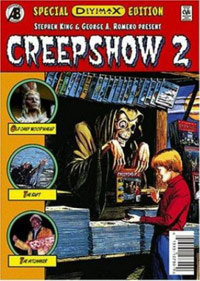 Most genre fans seem to cite the original Creepshow as the definitive and best horror anthology film ever made, but I’ve always had more of a soft spot and appreciation for its sequel Creepshow 2. The first Creepshow was the brainchild of famed horror author Stephen King (Carrie, Christine, Cujo, The Shining, It, The Dead Zone) and legendary horror director George A. Romero, the creator of Night Of The Living Dead and in essence the father of the movie version of the modern “zombie.” Their idea was to put together a live action anthology film which collected five unique horrific tales ala the old EC comics of the 1950s which featured Tales From The Crypt, The Vault Of Horror and The Haunt Of Fear. (Side-note: EC comics were also the creators of MAD magazine!) The segments drew in an all star cast including names such as Ed Harris, Leslie Nielson, Adrienne Barbeau and even King himself. While considered a sleeper hit at the box office upon its release, it would take five years before the sequel came to fruition.

For Creepshow 2, King provided the stories and Romero penned the script, but this time he vacated the director’s chair for Michael Gornick, Romero’s long-time cinematographer. Also, whereas the first film featured five separate segments and clocked in at 120 minutes, the sequel keeps a lean pace of three stories (plus an animated wrap around) all within 90 minutes. Famed FX artist Tom Savini (also a long-time Romero collaborator) portrays the live action version of “The Creep” during the prologue segment. Without further ado, here’s a break down of the three fiendish tales!

Old Chief Wood’nhead
Of the three new stories, this is the weakest of the bunch, but it is the first one so they do get better, and it also features one of my favorite actors in the lead, Mister George Kennedy! So if anything, it’s still a worthwhile entry into the Creepshow universe. Kennedy plays Ray Spruce who, along with his beloved wife Martha (Dorothy Lamour), owns a little general goods shop in the small town of Dead River. Unfortunately, the name of the town has become literal as the town has slowly fallen into disarray with too many people losing their jobs and leaving Dead River behind. The Spruces struggle with their business, but they manage to get by with each other. One day they’re visited by a Native American elder named Benjamin Whitemoon (Frank Salsedo) who bestows them with his tribe’s sacred treasures as protection.

Sadly, that evening, three thugs break into the Spruce’s shop and attempt a robbery, but with business as bad as it is, there isn’t much to steal. The leader of the pack is Sam (Holt McCallany), Benjamin’s nephew who demands his uncle’s tribal treasures. In the commotion, Sam shoots and kills the Spruces in cold blood. However, the old Chief Wood’nhead statue that guards the shop out front magically comes to life and with his tomahawk exacts swift and much deserved revenge on the three killers!

The Raft
Now "The Raft" is not only my favorite segment of Creepshow 2, but probably one of the stand-out episodes of the entire Creepshow film series. Four college students, Deke, Laverne, Randy, and Rachel, head for a remote and deserted lake to party and let off a bit of steam. They swim off to a wooden raft floating in the center of the lake and once there, they notice what appears to be an oil slick in the water. In actuality, it’s a Blob-like substance that they all witness suddenly devour a seagull. Realizing that they’re now floating a good mile or two away from shore, the blob creature starts surrounding their raft. Deke, the loud mouthed jock/stoner-dude of the gang, immediately wants to take control of the panicked situation and plans to make a swim for it once he sees a clear opportunity to outswim the slick creature. But alas, the blob isn’t all that dumb. One by one it manages to pluck each teen off of the raft, either by grabbing them through the cracks of the raft or snatching them as they look over. One of the funnier yet more horrific moments is when Randy and Laverne (the last remaining survivors) fall asleep on the raft. Although Randy was there with his girlfriend Rachel, and Laverne is/was with Deke, he inexplicably tries to make out with her while she’s asleep! Don’t worry though, the blob wouldn’t let him get away with it and the conclusion of this particular tale is both dark, hilarious and satisfying. This is a modern day version of the Blob but confined to a raft in the middle of the lake which makes it pure horror gold. Two points for King on this one.

The Hitchhiker
Lastly, there’s "The Hitchhiker," a segment that I remember scaring the absolute living crap out of me when I first saw it as a kid. But now I’ve conquered my fear and even wear a t-shirt sporting the Hitchhiker on it and his now-famous catch-phrase “Thanks for the ride, lady!” Annie Lansing (Lois Chiles) is a successful business woman who’s having an affair on her husband. That is if you consider hiring a gigolo for his services for the evening an affair. Realizing she overslept and needs to meet her husband, she takes off in a hurry in her Mercedes-Benz, but in her haste, and while speeding down a particularly dark and curvy road, she ends up accidently mowing down an unsuspecting hitchhiker on the road. No one witnesses the incident and in her panic she decides to flee the scene of the hit and run! On her way home, she’s continually trying to convince herself that she can live with the guilt of the accidental murder she just committed. And that’s when the hitchhiker himself keeps approaching her vehicle shouting out, “Thanks for the ride, lady” and keeps trying to get in her car! Haunted by the hitchhiker, she tries repeatedly to kill him and run him down over and over again, but he just keeps coming back, each time looking more hideous than the last time and still grinning and thanking her for the ride. Is she losing it? Or is the vengeful ghost of the hitchhiker exacting his revenge?

As with all the Creepshow films, there are some fun interstitial segments with Billy, the paperboy and horror fanatic who is reading these tales in the latest issue of Creepshow, but who also falls victim to a group of bullies. But hey, this is a Creepshow movie, so don’t worry. Those bullies will also get their comeuppance. While not the classic that the original is, Creepshow 2 does offer up a lot of fun stories and would make for a great group screening with friends. It was followed up by a completely unrelated name-only sequel Creepshow 3 in 2006, but most consider the Romero produced Tales From The Darkside: The Movie (a terrific horror anthology in its own right) the official Creepshow 3.

Fun Fact: While not yet officially working as KNB FX, the key FX artists Howard Berger and Greg Nicotero flew straight from the set of Sam Raimi’s Evil Dead 2 to work on Creepshow 2.