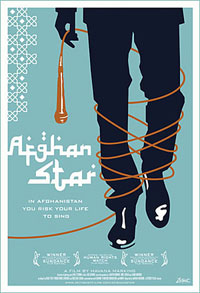 Who would have guessed that an American Idol type of singing competition show could bring enlightenment, democracy and change to a nation? Of course not in the U.S. - our version only inspires cruelty and insipid syrupy belted versions of stale Whitney Houston songs. But in Afghanistan, their version of the show, Afghan Star, may just be dragging a country that has been plagued by decades of wars, poverty and tribal fighting into the twentieth century where everyone believes that becoming famous is the goal of life.

Directed by Havana Marking, the documentary Afghan Star is the most fascinating peak into Middle Eastern media since Control Room five years earlier. Here we follow four contestants, each with different ethnicities from different parts of the country who risk their lives to sing on television. If you think the divisions of the States or regions in U.S. can be tense, Afghanistan's animosity between neighbors keeps the country constantly on the brink of a mini-civil war. But after years of Taliban repression (where television and singing were banned) and still a strong conservative Muslim arm in the country, the contestants and the show’s producer/host Daoud Sediqi are convinced that what their country needs is music and they are eager to give it. Even having a woman sing on TV is still considered radical and leads to a number of dangerous incidents which are well covered in the documentary. The film also does a great job of humanizing the Afghan people who show that no matter how dire the country seems to be, the contestants and the show's audience (at least a third of the country are regular watchers) are still so full of hope. On Afghan Star the theme songs from The Sound Of Music and Footloose are still alive, playing out with life and death consequences.

Although all the people spotlighted in Afghan Star are interesting and sometimes even lovable (including a progressive family who claim to be Afghan Star’s biggest fans), the centerpiece of the film is a young woman named Setara Hussainzada. Though she appears to be as talented as her fellow finalists, she is apparently a real underdog because of her personality. While the other sole female contestant is a traditionalist, by Afghan standards Setara is a giddy radical, a true artist, if ever there was one. This young woman has such a need to express herself, with her romantic, almost naive vision of love and music that it puts her life in true danger and ratchets up the intensity for even the filmmakers. When she is finally voted out of the show she is asked to sing a final song; while performing she removes her head scarf (a no-no) and sorta dances around the stage (a double no-no). By American Britney and Madonna standards her dancing is tame at best, but just a slight sway of the shoulders is enough to send Afghan TV viewers into a bloodthirsty craze, demanding she is murdered. Her odyssey from doe-eyed optimist to hunted reality star just wanting to get home to her family is heartbreaking and helps bring an extra dose of drama to Afghan Star, making the flick more than just an endearing travelogue.

The music of Afghan Star is completely alien to my Western ears. I had no way of judging which contestant was a genuine talent or not (which certainly makes it much more fascinating than the easier to judge but so much more bland version of the show we are used to here). The Afghan version has rinky-dink production values compared to our expensive and gaudy version here, but the need to perform and become a star is universal. However, what may be most surprising is another universal need, one that crosses all cultural lines, for audiences gazing at the blare of their televisions to anoint stardom for some and crush the dreams of others.