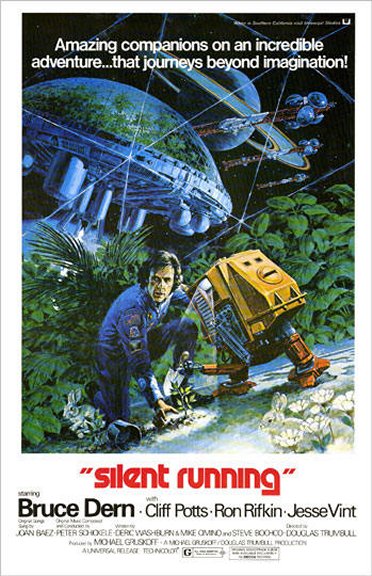 In the world of science fiction films Douglas Trumbull is quietly a hall of famer. His special photographic effects for Stanley Kubrick’s 2001: A Space Odyssey would set the standard for outer space visuals for years to come (and I, for one, still find the models more effective than CGI). As a visual effects pioneer, Trumbull would also go on to lend his expertise on films ranging from Close Encounters of the Third Kind, The Towering Inferno, Star Trek: The Motion Picture, Blade Runner, and, most recently, Tree of Life. As a director himself, he helmed two movies including Brainstorm in ’83, an interesting thriller about memory science, remembered mainly as Natalie Wood’s last film, and then, most importantly, the first film he directed: Silent Running, a sorta cerebral sci-fi environmentalist saga that has been a major influence on all the subsequent films of the genre.

After all plant life has been destroyed on Earth, scientist and gardener Freeman Lowell (Bruce Dern) works aboard a giant space freighter called Valley Forge with greenhouse domes attached that hovers in space near Saturn, housing both extinct plant life and animals. The idea is that one day these space plant abodes will be able to return to Earth and repopulate its fauna. Lowell is the Adam of this wildlife Eden, aided by his three cute little robots: Huey, Dewey, and Louie, while his yahoo human shipmates (played by Ron Rifkin, Cliff Potts and Jesse Vint) get drunk and android around on their space go-carts with no sensitivity to what he is trying to cultivate.

Shockingly, Earth's powers that be give orders to destroy the greenhouses and use the space freighter for commercial business purposes (there must’ve been a business savvy Republican running Earth). After a couple greenhouse domes are blown up, Lowell becomes a classic 1970s vigilante figure using cunningness to fight off and kill his crewmates to save the wildlife. Eventually he escapes in a dome with the robots and there he fixes his own wounds as well as the robots and teaches them to care for the plants. He seems to be the only human left who cares about ecology; ironically, after he gives up his own life to save the plants, the tending to Earth’s future environment falls into the hands of a robot.

Like Sam Rockwell in Moon, Silent Running is more or less a one-man show. Dern was the go-to guy in the ‘70s for slightly unhinged characters (Coming Home, Black Sunday), and here Lowell is less loony and more just a guy in over his head. And like a prophet he’s the only one who understands the importance of nature; Dern’s usual intensity carries the film effortlessly.

The ship sailing through the rings of Jupiter was a sequence originally developed for 2001 but was abandoned. Trumbull’s visual effects here are as impressive as they were for Kubrick’s flick, if not a bit more realistically subdued. The robots are like little R2-D2s but with more human leg movements (also an obvious influence on Wall-E). Their bond with each other also gives them rich character traits which was not often the case with droids in films before this era (I mean, as much as we like Gort from The Day the Earth Stood Still, he wasn’t exactly lovable). The Valley Forge model was later reused in the television series Battlestar Galactica, giving it another level of cult street cred. With a minimal but profound script by the writers of The Deer Hunter, Deric Washburn and Michael Cimino (and, of course, Cimino also directed it), and future TV head-honcho Steven Bochco (NYPD Blue), Silent Running is beautiful on all levels including a haunting score by composer Peter Schickele who was known more for his musical satires (Oh! Calcutta!), though the yodels of Joan Baez that can be heard are sometimes grating.

Science Fiction films can be looked at pre-Star Wars and post-Star Wars and, with the exception of 2001, most in the pre-era were considered B-movies, or kid stuff. Star Wars upped the importance, making them financially vital to studio’s bottom line. The background of how Silent Running even got made is one of those “only in the ‘70s” stories. After the success of so many groovy youth-driven flicks like Easy Rider, Universal Studios set up a bunch of upstart young directors with deals to make films at a million bucks a piece (including Milos Forman’s Taking Off, Peter Fonda’s The Hired Hand, Dennis Hopper’s disastrous Easy Rider follow-up The Last Movie, and Mr. Star Wars himself, George Lucas, made his now classic American Graffiti, the one film in the group that really paid off economically).

So Silent Running was no tent pole, it’s more of a personal film that just happens to be set in the future and outer space. Its apocalyptic themes of man destroying nature for economic gains are proving foretold. Silent Running takes a little while for the plot to get cooking but once it does, it’s almost hypnotic; think of this very unique film as a cross between The Omega Man and An Inconvenient Truth.