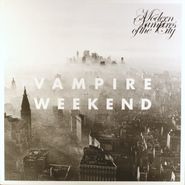 
Currently Unavailable Artist: Vampire Weekend
Genre: Rock
Release Date: 05/14/2013
Label: XL Recordings
Catalog Number: 556-0
Recording: Studio
Sound: Stereo
Length: 42:54
Format: Vinyl LP
Note: Limited Edition White Vinyl.
We are now sold out of our online Pre-order for the Limited Version of the Vampire Weekend LP.
We still have copies of the regular LP available for order.
We will have copies of the Limited LP available for purchase in our store locations only. While supplies last.

Vampire Weekend graduated early. It only took them three albums to ditch the twee post-collegiate references of Oxford commas and horchata that catapulted them to the head of the class among indie rock's intelligentsia. Instead Modern Vampires of the City takes on heavier lyrical themes while further refining and elevating the band’s razor-sharp production. For their third outing, the wit remains, but with less of a wink. And for that they should receive extra credit.

Every time the world turns against Vampire Weekend, they have a way of turning around and shattering expectations. From the get-go, the band was dogged with Strokes comparisons and scoffs of Ivy League grads pilfering African music while singing about rich people. But none of those things could stop people from enjoying their immensely enjoyable first album, their underrated second one and now their third pop opus, Modern Vampires of the City. It’s low-key like Contra, but Modern Vampires’ hooks are silkier and more ingratiating. “Step” waltzes with a gorgeous collegiate melody, featuring some of the finest singing to date by Ezra Koenig, who’s finally mastered that Paul Simon trill. He also extends his voice beyond its comfort zone, taking on Buddy Holly-style hiccupping and extending his range up and down (aided by digital skewing) while the band rocks a solid shuffle on “Diane Young.” It’s one of their best singles yet. Koenig’s lyrics, too, retain their wittiness and specificity, though they are open enough to make your own implications — “though we live on the U.S. dollar, you and me we got our own sense of time,” he sings memorably in “Hannah Hunt,” which ends with a beautiful, well-earned climax in which Koenig tears his lungs out belting. The band mostly stays supportive, only going full-tilt on a few songs, like the galloping “Worship You,” which allows Koenig to spit verse at lightning speed, or pulling out grand pop moments in “Unbelievers” and the uber-strange “Ya Hey,” which pairs its intricate melodies with hyper-warped vocal tricks. Modern Vampires doesn’t go for obvious, occasionally obscuring itself in too much oddity and not ripping loose often enough. But few bands at this level are still taking these many chances, and pulling it off more often than not. Vampire Weekend’s freewheeling Modern Vampires of the City firmly perches the band back in the top echelon of bands making music today.