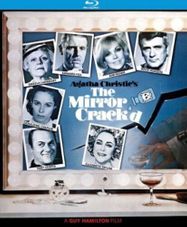 Agatha Christie's Miss Marple (Angela Lansbury) finds her normally quiet little village becoming abuzz with the exhilaration of Tinseltown due to a Hollywood movie being filmed there. But when a fan of one of the lead actresses is poisoned, it falls to Marple to investigate the murder and find the killer... as well as the true intended target. The marvelous supporting cast includes Elizabeth Taylor, Rock Hudson, Kim Novak, Edward Fox, Geraldine Chaplin, and Tony Curtis. 105 min. Widescreen; Soundtrack: English; Subtitles: English; audio commentary; TV spots; theatrical trailer.