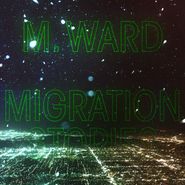 M. Ward’s Migration Stories is a narcotic and nocturnal exercise in songwriting, with a sound as gauzy as its album cover. Largely acoustic driven, Migration Stories features what seem to be rather straightforward folk songs cloaked in all manner of sonic treatments, creating a tremendous moodiness and blurring the lines between sentiments happy and sad. At times M. Ward’s voice barely cracks above the fray, sounding weary and weathered and occasionally consumed by the ghostly atmospherics. Thus explains songs like “Heaven’s Nail and Hammer,” which takes a Louis Armstrong melody to Lynchian surf guitars, managing to sound both ominous and uplifting. “Unreal City” resembles a classic Springsteen song turned inside out, coming on as a ‘50s rock ‘n roll stomper before gradually deconstructing itself into a synth-assisted anti-chorus; an unwinding from the thrill of its sing-a-long introduction.