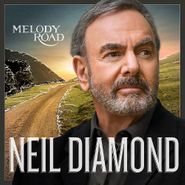 Neil Diamond, the immortal songwriter and performer, released his 32nd studio album. Having just signed to Capitol records and remarrying a couple years earlier, at the age of 73 the man knows now more than ever what he likes, and what he likes is not surprising. Melody Road, filled with session musicianship, heartfelt ballads, and damn catchy songs, reads like a classic Diamond release. The record is emotional. It has horns. It is Neil Diamond. To hear an artist not try to fit into a mold that is in vogue at the time and instead stay true to his own tastes and the tastes of his fans is very heartening. However, that type of release could potentially be a rehashing of all the things that he has done before. Luckily, the openness of the intended audience allows Diamond to expound on the topic of love in a new fresh way. Having found a new love with the young Katie McNeil, and a new musical partnership with Capitol it is no surprise that Melody Road sounds blissfully hopeful. A true honeymoon document for the fans to prove Neil is doing just fine.