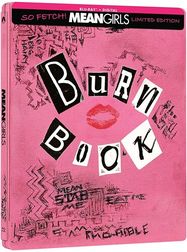 Tina Fey scripted and co-stars in this sharp comedy, based on the book by Rosalind Wiseman. Teenager Cady Heron (Lindsay Lohan), after being home-schooled in Africa by her zoologist parents, suddenly winds up in a suburban Illinois high school. But not even growing up in the jungle could have prepared Cady for the struggles she now faces, especially when she starts dating the most popular girl in school's ex-boyfriend. With Rachel McAdams, Lacey Chabert, Tim Meadows, Amy Poehler. 96 min. Widescreen; Soundtracks: English Dolby TrueHD 5.1, French Dolby Digital 5.1, Spanish Dolby Digital 5.1; Subtitles: English (SDH), French, Portuguese, Spanish; audio commentary by Fey, others; featurettes; deleted scenes; theatrical trailer; bloopers.