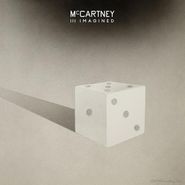 Paul McCartney’s McCartney III Imagined is essential listening for longtime fans and newer listeners looking for a top-shelf gateway drug into the legendary artist’s catalog. As you can probably guess, it’s an album of songs that were remixed and re-recorded by different artists off of McCartney’s 2020 full-length. It’s probably also no surprise that Sir Paul has assembled some of the biggest stars in the indie galaxy to take a turn in the studio. But what a roster it is! Expect some pretty heady work from the likes of Beck, Khruangbin, St. Vincent, Dev Hynes, Phoebe Bridgers, Radiohead’s Ed O'Brien, Damon Albarn, Josh Homme, Anderson .Paak, Massive Attack’s Robert Del Naja, Dominic Fike and Idris Elba. Hear it to believe it.