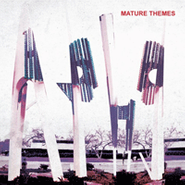 Mature Themes is a misnomer in that Ariel Pink still sings about things like “suicide dumplings dropping suicide bombs” on Bowie-ish “Kinski Assassin.” But there’s a newfound desire to move beyond jokey lo-fi (even when it serves him well, as on the heavy blues of “Schnitzel Boogie” and ethereal jazzercise jam “Pink Slime”). On the’70s soft rock reflection of the title track, the jangly “Only in My Dreams” and ace cover of Donnie & Joe Emerson’s quietly romantic “Baby,” Ariel Pink creates affecting pop with barely a wink.

Mature Themes proves to be a tongue-in-cheek title, though its title track does tuck quarter-life crisis neatly into clever lines and jaunty ’70s AM Gold (“I wish I was taller than 5-foot-four/Thirty-five years old/My life spent computing it all”). Ariel Pink has a way of making even self-destruction sound amusing, bouncing lyrics like “Who sank my battleship? I sank my own battletrip” off gooey guitar riffs and organs on Mature Themes’ opener, “Kinski Assasin” (another sample lyric: “suicide dumplings dropping testicle bombs”). It’s as much fun as its predecessor, Ariel Pink’s lo-fi pop breakthrough, Before Today, but with more of a focus on songcraft. “Only in Dreams” has its fair share of neat production flourishes, but it wouldn’t need them to send its ’60s pop hooks into your brain. And with repeated listens, the breadth of bargain-bin pop and forgotten sources reconfigured through Ariel Pink’s art school lens becomes more apparent, and more bewildering. Is “Live it Up” meant to sound like the dream-pop soundtrack to an early NES game? Is “Symphony of the Nymph” both the name and theme song to a sexy straight-to-VHS ’80s comedy? Is “Schnitzel Boogie” actually a boogie, and does that mean I should learn more about boogie? With Ariel Pink, every song seems to occupy its own little sound wave, and surfing between their brilliant colors makes all others seem monochromatic in comparison.