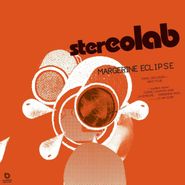 If you’ve ever dreamt of owning every track Stereolab ever created during the Margerine Eclipse sessions, this newly remastered expanded edition is for you. Like its companion release (also out today), Sound-Dust, this fresh incarnation of Margerine Eclipse was remastered from the original 1/2” tapes by Bo Kondren (Calyx Mastering) and overseen by Stereolab’s Tim Gane. The bonus tracks on the album include a tour single and material originally included on Instant O in the Universe. A fitting treatment for a massively influential album that still packs a heady punch.