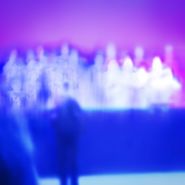 Tim Hecker’s music continues to defy description on his latest release. “Ambient” is the loose descriptor often attributed to his music, but that could imply that Hecker’s music sits quietly in the background, which it does not; that it doesn’t seek to upset, which it does, despite being frequently beautiful. Tracks suddenly come into being and evolve as an uneasy interaction between physical instruments and clean synths, and waves of corroded digital noise and unmoored percussive elements, creating an unpredictable, throbbing whole on tracks like “Live Leak.” Rather than exist as something to viewed as though at a museum, these tracks slowly twist their tentacles around you and insist upon your reaction. They often seem like the wordless soundtracks to life’s most indescribable, unexpected moments — hence the album’s title, perhaps. Though Hecker’s albums are best listened to as a whole, “Castrati Stack’s” close, celestial harmonies and vocal trills by the Icelandic Choir Ensemble make it an ideal sample for the uninitiated. Though not always approachable, Love Streams rewards those who take the plunge. It’s another unforgettable experience from Hecker.