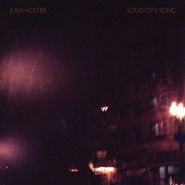 Reading about the construction of a Julia Holter album is a bit like reading an art student's honors thesis — one album was built around a Greek tragedy; this one's loosely built around the musical Gigi. Listening, however, is another matter, and Loud City Song might be Holter's most transcendent statement yet. Her voice can come off as icy and ethereal, but on "World," it's firmly grounded and comes through with stunning clarity as she sings of urban melancholia -- "what are you wearing? ... I live on the 5th floor of the apartment building ... what am I looking for in you? How can I escape you?" It feels like listening to snippets of phone conversations and thoughts from miles of anonymous citydwellers, while lush horns and harpsichord craft blankets of sound around her. "Horns Surrounding Me" begins with what sounds like someone being chased while she whispers paranoia before launching into a cold, pulsating orchestral pop number. Each of Loud City Song's pieces feels purposeful; you could write at length about each one, like how "He's Running Through My Eyes'" soft movements curl in unexpected ways, or how "In the Green Wild" counters its seemingly carefree, scat-like delivery and standup bass with dread-inducing strings and dark, descending backup vocals. Holter creates her own galaxy on Loud City Song, with each of its songs a strange, spinning planet of sound.