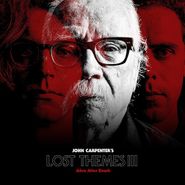 Created with his son Cody Carpenter and godson Daniel Davies, John Carpenter's Lost Themes III: Alive After Death is his first album of non-soundtrack music in nearly five years. The 2016 release of Lost Themes II was a comeback for the beloved director/composer, but since then he scored the acclaimed 2018 version of Halloween and has continued to delight music lovers and movie fans with his creepy, ominous, synth-heavy creations à la "Alive After Death." But these tracks conjure dramatic movie scenes as well as that kind of sinister crawl: "Weeping Ghost," for example, has an exciting forward motion to it and "Skeleton" is pulsing and dynamic.