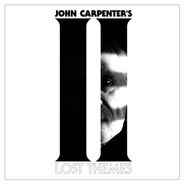 Lost Themes II continues to bring famed horror and thriller film director and composer John Carpenter out of retirement and back into the limelight. The musical world here is a wilder one than that of its predecessor. More guitars and beats flesh out the songs, still driven by Carpenter's trademark minimal synth. “Distant Dreams” and “Persia Rising” sound like dark Italo Disco of the kind currently emulated by bands like Chromatics. The crystalline synths of “Angel’s Asylum” give way to a propulsive motorik beat, and “Utopian Façade’s” mixture of foreboding and bright tones sounds like it could be the theme song to a remake of Blade Runner. Even if Carpenter never returns to making the kind of classics films he made and scored in the ’70s and ’80s, the new music he makes brings back fond memories of those films and reminds us that Carpenter should go down in history not only as a master filmmaker, but as a greatly influential musician as well.