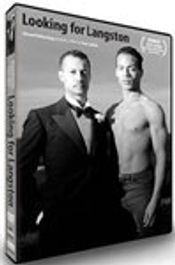 A beautifully photographed film on various aspects of black male sexuality in western culture is revealed within the “pseudo-documentary exploration of the life of Langston Hughes” [note to self: don’t believe the hype], Looking For Langston.

It’s a short film but it rushes headlong and moves easily and quickly between archival television footage of Langston Hughes reading with jazz combo accompaniment, archival photographs/footage of Harlem and various Harlem Renaissance figures (and some non-Renaissance figures such as Robert Mapplethorpe) along with faux-archival footage and images which are interspersed, broken up, explained and explored with readings from the works of poets Bruce Nugent, James Baldwin and Essex Hemphill visually mated to scripted black & white fantasy sets of nightclub, bedroom and outdoor scenes populated by black men (and a few white men) as a means of touching on, and exposition of, the effects of racism, classism, desire, exploitation and threats of violence and STDs in relation to Anglo/American gay black men.

Beautiful monochrome black & white is the order of the day for director (and noted painter/film/installation artist) Isaac Julien and cinematographer Sunil Gupta. The set design on the movie, as well as the film restoration undertaken, I believe, by the British Film Institute, is magnificent; I spent several minutes freeze-framing scenes just to look at the backgrounds and detail. Although overall the movie’s themes and visuals (nude black men rolling around, oh my!) might not be to the interest or liking of your everyday “Joe Six-Pack,” I found it quite engaging and interesting as an artistic statement on the director and his sexuality within and without the context of previous gay artists.