Before a recent move to Los Angeles where he has been immersed in film acting, Garth spent two decades in San Francisco fanning the flames of conscious hell raising that existed there in generations past. Parties with his stamp include a coveted ten year residency at Come Unity, 24 legendary years with the Wicked Sound System and more recently Back2Back, with right hand man Jeno. His sound is a radical fusion of Acid House, Space Disco & Psyche Rock. He has produced 50+ records mostly on his own labels Grayhound and Golden Goose edits and remixed everyone from Tribe Called Quest, Faithless, Perry Farrell, Yabby You & Freeland. Bringing UK sound system culture to San Francisco in 1991, Wicked's lawless full moon beach parties ushered in an era of Acid House hysteria that ripped through the west coast and spread into the heartland. 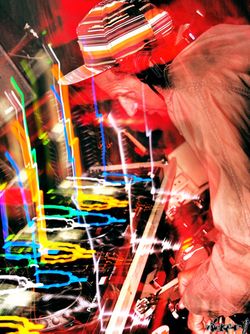