Show is free/all-ages. Purchase their full-length CD or vinyl EP in-store only at Amoeba on 1/21 to meet BONES UK and get your copy signed after their performance.

Made up of vocalist Rosie Bones and virtuoso guitarist Carmen Vandenberg, the newly Grammy-nominated BONES UK don’t waste a second of their self-titled debut album, confronting everything from the beauty industrial-complex to toxic masculinity and music-scene sexism; embedding each track with choruses primed for passionate shouting-along.

Released this Summer by famed rock label Sumerian Records, the album is bursting with passion and planetary-sized aspiration – understandable for a band who started the year fresh from co-writing and touring with Jeff Beck on his last album ‘Loud Hailer’, performing in venues such as The Hollywood Bowl and Madison Square Garden. As BONES UK, they have spent the last year opening for rock luminaries including Tom Morello, Stone Temple Pilots and Band Of Skulls - not to mention spells with Highly Suspect, The Struts, The Glorious Sons and many others. 2020 will see them heading out with KORN and then fellow UK rockers Royal Blood.

Recently GRAMMY-nominated for Best Rock Performance, their song “Pretty Waste” and other titles such as “Beautiful Is Boring” and “Girls Can’t Play Guitar” demonstrate a commitment to using their art to speak their minds; shedding light on the disconnect between the status quo and the far more glorious world inside their heads. Howard Stern became another notable early fan, inviting them into his SiriusXM show to perform their cover of David Bowie’s “I’m Afraid Of Americans” – another standout included on the album.

In between such epic tours and award nominations, the band have amassed further notoriety for their parties and various curated events hosted in across multiple global cities, each one a celebration of inclusivity and letting one’s inner ‘Filthy-Freak’ fly! They are also due to release their own 29 minute short film in January and are busily plotting their ways to use the upcoming film festival circuit as another vehicle to spread their gospel to an even wider audience. From all this, BONES UK might seem like a band who are already quite far along with their mission, but spend any time in their presence and it’s easy to see that these girls are only just getting started… 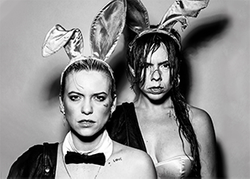 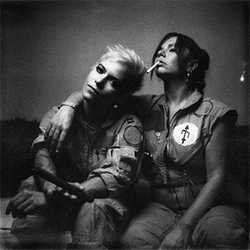