See (and hear) Knives Out when it opens in Theaters on November 27th!

- Pre-order your copy of the vinyl LP at Amoeba Hollywood on December 2nd and receive Knives Out Soundtrack artwork to get signed.

- One pre-order/signing admission per person.

- In-store purchases only - no online/phone orders.

- Nathan and Rian will be signing artwork from Knives Out only (no outside/additional items will be possible).

Nathan Johnson is a multidisciplinary artist best known for his arresting and inventive streaks that dot his career as a composer.

Johnson’s first score was for the neo-noir Brick in which he recorded the entire soundtrack using a single microphone in his apartment, mixing traditional instruments such as the trumpet, piano and violin which things such as the wines-phone, filing cabinets’ and kitchen utensils. His acclaimed score led him to collaborating on Rian Johnson’s other projects such as The Brothers Bloom, Looper, and Knives Out as well as films such as Joseph Gordon-Levitt’s Don Jon and Jeremy Renner’s Kill the Messenger, among others.

Nathan also is a music video director, writer, and editor having worked on music videos for Son Lux and Lucius. He has given talks at universities around the world and has presented his work at the Hammer Museum, Adobe MAX, TED, and Apple.

When he is not creating music or videos, he works as an art director with The Made Shop, a boutique design firm that specializes in graphic and architectural projects. He lives in Los Angeles with the help of his friends.

Rian Johnson is the writer and director of Knives Out -  one of the most anticipated films of 2019. It opened to rave reviews at the Toronto International Film Festival and will be released by Lionsgate on November 27th. The film stars Daniel Craig, Chris Evans, Jamie Lee Curtis, Michael Shannon, Christopher Plummer, Toni Collette, Don Johnson, Lakeith Stanfield and Ana de Armas. The murder mystery follows a detective as he investigates the death of a patriarch of an eccentric, combative family.  Johnson will also create a brand-new Star Wars trilogy, the first of which he is set to write and direct, with longtime collaborator Ram Bergman onboard to produce. His previous films include Stars Wars: The Last Jedi, which he was chosen to helm after directing just three films, including the critically acclaimed Looper, The Brothers Bloom and Brick. 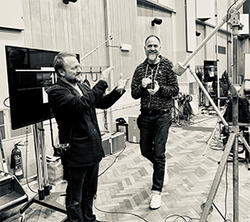