Jay Midnight, born and raised in San Mateo, California (SF Bay Area), is an international DJ and former radio host who founded his own record label, Run The Record. Jay released two back to back projects in September of 2017, Midnight Theories Vol. 1 & Vol. 2, and has releases coming in 2020. He has also launched a monthly show, Run The Record Radio, currently available on Apple Music (iTunes Podcast), Mixcloud.com/RunTheRecord and on SoundCloud.com/RunTheRecord, and launched his new weekly radio streaming show Run The Record TV on twitch.tv/RunTheRecord starting May 25th, 2019.

Jay has DJ’d with many artists including: Madlib (2x), Yasiin Bey (Mos Def), comedian Dave Chappelle, Lakim (Soulection label), Gaslamp Killer, and frequents in SF, San Jose, LA, Japan, and Australia. He is no stranger to Amoeba Music, having played multiple shows both in the SF and LA stores and currently has his own section at all three Amoeba Music locations. 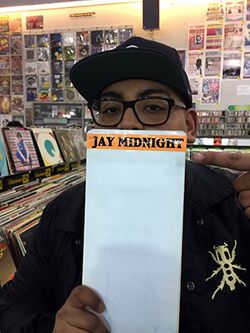