Comedian Greg Barris is hosting a charity auction to benefit Alzheimer's Los Angeles at Amoeba Hollywood Saturday, October 5th at 4pm! We'll auction off a crazy array of collectibles, signed items, concert tickets, and other things you never knew you had to have.

Plus, Amoeba matches all winning bids up to $1,000, which means we'll double the money going to the Alzheimer's Los Angeles and their mission to provide FREE education and support services to families and caregivers who need it so desperately.

Greg Barris is an American Comedy Scene Darling and served as a staple in New York’s downtown stand-up scene for years. A frequent Time Out New York Critic’s Pick, much loved by BrooklynVegan and hailed as "Excellent" by The New Yorker, Greg created and hosted the long-running Brooklyn comedy variety show "Heart of Darkness." Greg and guitarist / visual artist Dima Drjuchin (Corrupt Autopilot) teamed up to form the Wigmaker's Son. Together they created a Zappa-meets-Lonely Island pop fantasy comedy album, Greatest Tits which also featured friend Reggie Watts. Greg released his debut stand-up album Shame Wave on aspecialthing Records and will be releasing a new comedy album on the label in the near future. Greg now lives L.A. where you can find him on stages across the city and beyond. Follow him on Instagram: @galimmimus

Alzheimer's Los Angeles works to improve the lives of local families affected by Alzheimer’s and dementia by increasing awareness, delivering effective programs and services, providing compassionate support, and advocating for quality care and a cure. They offer free classes and workshops about brain health, memory concerns, Alzheimer’s disease and other dementias, along with care counseling and so much more.

Can't make it to the charity auction? Another way you can help support Alzheimer's Los Angeles is through their Walk4ALZ event on October 20th. You can join the Amoeba team and walk with us or donate online.

** Limited edition Once Upon a Time In Hollywood soundtrack LP with alternative cover. 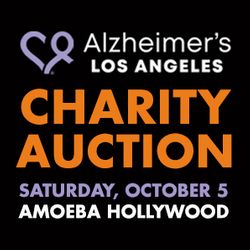 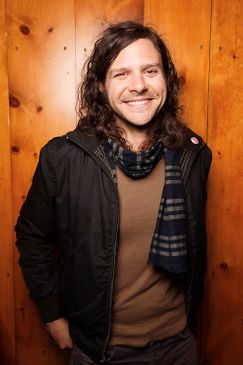