Fans of The Frights can purchase Hypochondriac on CD or LP in-store only at Amoeba on 8/23 to meet the band and get the album signed after the show. Signing space is limited.

- One signing ticket/album per person.

Show is free and all ages.

Hypochondriac, the third full-length album from San Diego band The Frights, is an album full of addictively catchy songs about fear and frustration. “I’ve gotten better with time, but I’m pretty paranoid about most things, especially health issues—I think everything’s killing me,” says Mikey Carnevale, vocalist/guitarist for The Frights. “That, mixed with anxiety, means that I can be a real baby. All of these songs address this in one way or another.”

Produced by FIDLAR frontman Zac Carper, Hypochondriac follows The Frights’ 2016 album You Are Going To Hate This and marks a period of major creative growth for the band (which also includes bassist Richard Dotson, drummer Marc Finn, and guitarist Jordan Clark). “I wrote every song on an acoustic guitar, which is something I made a point to do,” says Carnevale. “With the records before, I always wrote on an electric guitar, super-loud, because I wanted to feel that kids could mosh to it. Now I don’t care.”

The result is a more nuanced album than The Frights have ever attempted, equally driven by their relentless melodies and flashes of surprising sonic detail: the sudden harmonies of “No Place Like (Not Being) Home,” the waltzy reverie of “Alone,” the dreamy textures of “Broken Brain.” Carnevale also altered his process in creating the revealing and vulnerable lyrics laced throughout Hypochondriac, taking a more deliberate and exacting approach. “I’m very ADD when writing lyrics. I can’t sit for very long,” says Carnevale. “So this time, I would actually force myself to sit and write a complete song. I would wake up, and before I did anything else, I would write…It was frustrating. But that’s what worked!”

With Carnevale pointing out that “I went through quite a lot of bullshit since the last record, so I had a lot to talk about,” Hypochondriac shows his rare ability to convey so much layered emotion in a single lyric (from “Whatever”: “And I’m still messed up from when you said you didn’t love me/Thirty minutes before we played ten songs about your name”). On songs like “CRUTCH,” with its throat-shredding confessionalism, Carnevale twists that dynamic and proves the power of plain-spoken truth (“I’ve been on medication I can’t pronounce and I’m fucking sick of it”). Meanwhile, “Goodbyes” gets more poetic in its storytelling (“Morning knocked me awake and ripped my clothes off”), an element perfectly suited to the song’s folky romanticism and cascading guitar work.

From song to song, Hypochondriac matches the uncompromising self-awareness of Carnevale’s lyrics with a sound that endlessly shifts and changes form. The album-opening “Tell Me Why I’m Okay” begins with stark acoustic guitar, then warps into a pogo-ready pop track, ultimately turning frenetic and unhinged in its final seconds. On “Pills,” The Frights deliver a furious anthem fueled by buzzy guitar riffs and chant-along vocals, its lyrics capturing a subtle determination (“I won’t lose you/I might lose my mind/But I will carry these pills ‘til the day I die”). And on “Hold Me Down”—one of the most rip-your-heart-out moments on Hypochondriac—the band brings graceful guitar tones to an epic expression of love (“As far as I can see you’re my favorite part of me”).

Recorded at Balboa Recording in Los Angeles, Hypochondriac came to life over 14 straight days of 12-hour-long sessions, during which the band consumed “14 bottles of tequila, 200 Tecates, and a few bottles of champagne, for some reason,” according to Carnevale. After this intense process, Carper delivered the songs to Rob Kinelski (Ed Sheeran, Billie Eilish, 30 Seconds To Mars) for mixing and to multiple Grammy Winner Greg Calbi (Arcade Fire, Tame Impala, The War on Drugs) for mastering. The album is their first full-length for Epitaph Records, who signed The Frights in early 2018. Formed in 2012, the band made their debut with 2013’s Dead Beach EP, then released their self-titled full-length later that year. Upon arriving in February 2016, You Are Going To Hate This debuted on the CMJ Top 200 chart. Also produced by Zac Carper (SWMRS, Dune Rats), the album earned acclaim from outlets like Brooklyn Vegan (who praised its title track as a “super catchy blend of Weezer, SoCal pop punk, and Burger-y garage rock”).

Throughout Hypochondriac, The Frights build a brilliant tension between their shiny hooks and painful lyrics, their goofball spirit and melancholy outlook. In the end, the album unfolds as their most emotionally honest work so far, just as the band intended it to be. “I talk about embarrassing things that I don’t even like saying to people I know, much less to complete strangers,” says Carnevale. “In the past, I think I’ve hidden behind distortion and reverb, and this one is very dry and raw and in your face. There’s nothing to hide behind.” 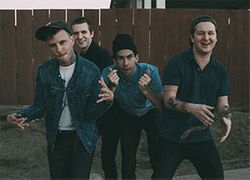 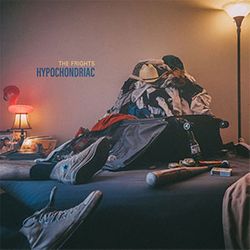