Amoeba SF turns 20 this November! To celebrate this Platinum Anniversary, we're throwing a two-day party Friday 11/17 and Saturday 11/18. We kick off the festivities on Friday with a live performance and signing with electronic-soul sister duo Ibeyi at 5pm. Sisters Lisa-Kaindé and Naomi Díaz will sign their new album Ash (out now on XL Recordings, available on CD & vinyl). The first 50 customers to buy Ash at Amoeba SF on the day of the in-store will get a wristband entitling them to a spot in our preferred viewing zone and priority in the signing line.

Additionally, 1,000 used vinyl records will be hitting the floor on Friday morning for the first time. Get the jump on the fresh stock!

Ashes typically have a funereal connotation, and suggest a sense of crumbling. And it’s true that the two sisters of Ibeyi, Lisa-Kaindé and Naomi Díaz, wrote the first song on their album Ash, also entitled “Ash,” during the American elections. Despite the heaviness in the air, Ibeyi sought to write a song that plucked positivity from the very place where all hope seemed to be lost, which, in turn, became an underlying theme for the album as a whole. “We can do positive things with ashes,” Naomi says. “Ashes can fertilize,” Lisa-Kaindé adds. “There’s still hope.”

Their first album, the eponymous Ibeyi, grappled with the past—the sister’s relationship, origins, loss, and roots. It earned them fans and collaborators in some of the most iconic and crucial artists of today, Beyoncé and Alvin Ailey included. By contrast, Ash is a more visceral and potent political statement, and while firmly rooted in Afro-Cuban culture and history, finds itself entirely concerned with Ibeyi’s present: Who Lisa-Kaindé and Naomi are, what’s important to them, and how they live today, especially given that the spheres, both personally and politically, are entirely different from when Ibeyi was recorded. It’s also a testament to their cathartic live performances, where they’re able to transmute a vast array of emotions—sorrow, anger, sensuality, happiness—to and through their fans.

Ash is also a study in deft electronic production. The album’s rapturous opener “I Carried This For Years,” awash with Lisa-Kaindé and Naomi’s voices interlacing with each other and a sampling of the “Dragan I Slavei” by the Bulgarian choir Le Mystere Des Voix Bulgares, evokes the sense of both a mantra and a rallying cry. “This album was born because of feelings we had in our bellies, whether it’s energy that wants to get out, fear, love, anger, joy and hope,” Lisa-Kaindé says. “All the songs and the subjects that we’re talking about on this album, we’ve actually been carrying them for years.” The meditative quality of single-line repetition also grounds mighty tunes like “No Man Is Big Enough For My Arms,” which features samples of a speech given by former First Lady Michelle Obama and is drawn from a phrase in Jennifer Clément’s Widow Basquiat, which Lisa-Kaindé was reading during one of the recording sessions.

Ibeyi worked once again alongside XL head Richard Russell, a confidante and friend, to produce Ash at his studio. “We absolutely wanted, 100%, to work with him again: It was not even a question,” Lisa-Kaindé says. “Richard is an amazing producer...wherever you want to go, he will guide you there. But it feels like you're playing with him. You’re sharing ideas together and he has an amazing ear. It’s like a flow, it’s really easy.” To that effect, Naomi adds: “It’s like we produced the album too, actually, and it’s a good feeling.” Along with Russell’s stylized production sensibilities, Ibeyi drew from a host of influences ranging from Kendrick Lamar, Jay Electronica, Meshell Ndegeocello, Erykah Badu and Nina Simone and beyond, to craft the wide-ranging musical landscape of Ash. Yet visual art also played a pivotal role here, with the sisters particularly drawing inspiration from video artist Chris Cunningham for the striking “Numb.”

The sisters have never shied away from writing lyrics that reflect the depth of their shared history, and include songs written in English, French, and Yoruban. Yet Ash also brings with it the first song the two have written that includes Spanish lyrics, “Me Voy.” It’s not a coincidence that Lisa-Kaindé wrote the song when she was leaving Cuba, a place where Ibeyi holds strong roots. The moving “Me Voy,” which also features the vocal styling’s of the Spanish hip-hop artist Mala Rodríguez, is also firmly intended to be a sensual song. “I feel when women talk about sensuality and it’s felt, not only is it sexy but really powerful,” Lisa-Kaindé says. “And also, it’s really complicated: Sensuality is not being sexy.”

Instrumentally, Ash finds Naomi refining her skills at the cajón and the batá, and Lisa on the piano, and expands the use of electronics, as well. It’s the idea of transmission, though, that lies at Ash’s core. “I think it’s one of the most important words that I know!” Lisa-Kaindé explains. “I wanted to be a music teacher when I was younger. So transmission has always been important for me. I feel like I was also raised by strong, independent women and I think they transmitted that to me. I think that also artists saved my life through their art; that they transmitted to me. I feel like the most important thing you can do is transmit to people your truth and your energy and what you feel and how you feel when you’re a musician.”

This symbiotic exchange is writ large on Ash, especially on the seven-minute-long epic and album centerpiece “Transmission/Michaelion.” It’s a song that Ibeyi wrote with their fans in mind, and envision singing the song’s vivid chorus—“we sing and our tears dry / facing a clear sky”—at their cathartic live shows in a beautiful, intense and symbiotic moment. The venerable Meshell Ndegeocello lends her talents on the bass for the song, and it also features an excerpt from The Diary of Frida Kahlo, as read by Maya Dagnino, Lisa-Kaindé and Naomi’s mother (who also co-wrote many of the lyrical parts of Ash). “Richard has a seventh sense of knowing when a song needs a sample,” Lisa-Kaindé explains. “And he said, ‘It would be awesome to have a sample of a strong woman you admire,’ and we said ‘Frida Kahlo!’” the two exclaim together. The two then asked Dagnino to choose a passage she felt connected with, which resulted in the powerful Spanish mid-section of “Transmission/Michaelion.” Pies para qué los quiero / Si tengo alas pa’volar,” she reads (“Feet, what do I need them for / If I have wings to fly?”).

“Transmission/Michaelion” also delves into a sample of the poet Claudia Rankine’s audiobook Citizen: An American Lyric, in which she proclaims: “I don’t know what the water wanted.” This idea especially has resonance for Lisa-Kaindé, who is the daughter of the Yoruban sea goddess Yemaya. “So she’s obsessed with water,” Naomi says. “I love water. But my god, I’m the thunder.” Naomi’s seismic presence has always been integral to the Ibeyi DNA, especially where the duo’s production is concerned. But she has a more vocal presence on Ash; she shares lead vocal parts with her sister, and on the likes of the lapping “Waves,” which features just a synth and her raw vocals, she steps completely into the spotlight. “I said to Lisa, ‘I want to be more present,” Naomi says. “I think when you see us, we’re both doing the project. But for the first album, you maybe thought Lisa was more in the front and I wanted to sing more on this one.”

The potency of Lisa-Kaindé and Naomi’s vocal interplay is especially evident on the barreling grooves of “Away, Away,” which Ibeyi released as Ash’s first single. It’s a song that demands to be listened to at top volume, windows down, as the two sing the tale of a girl who looks out the window, sees the world falling down around her, and doesn’t do anything about it. Until she begins to sing, that is. “It’s the start of this fire that she feels in her belly and this energy that is going to make her do something,” Lisa-Kaindé says of the girl in the song. It’s reflective of how a call to arms is a central theme on Ash. For instance “When Will I Learn,” which features Chilly Gonzales on the piano, deals with the idea of reversing past mistakes, particularly concerning making others happy at the expense of your own-well-being.

While Ash is an imprint of the sisters’ lives at this particular moment, it’s also reflective of a lifetime of reckoning, particularly with injustices not limited to the systematic oppression of police violence and racism. “Deathless,” which features the incomparable Kamasi Washington on saxophone, was written in the wake of an experience that Lisa-Kaindé had when she was sixteen that involved her being wrongly arrested by French police. “They were talking three centimeters away from my head saying, ‘Are you fucking kidding me?’ and being really loud...he assumed I was obviously a drug addict or a dealer,” she remembers. So he was really mean and rough, and then he took my bag.”

Lisa-Kaindé mentioned the story to Russell, who asked if she wanted to write a song about it. So she went home and wrote the emotive, “Deathless,” which describes her experience in unsparing detail, and extends a hand towards anyone who has ever been made to feel inferior through an anthemic chorus. “I was writing ‘Deathless’ as an anthem for everybody!” Lisa-Kaindé says. “For every minority. For everybody that feels that they are nothing, they are small, who cares. And I want them to listen to that song and for three minutes feel large, powerful, deathless. I do have a huge amount of respect for people who fought for what I think are my rights today. And I think the fact that I’m saying ‘we are deathless’ is saying that they are living through me and trying to be in a better world.” 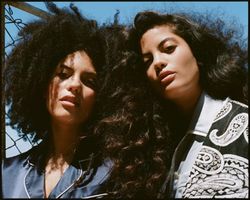 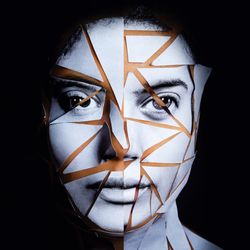