Amoeba celebrates the release of Henry & Glenn Forever & Ever: The Completely Ridiculous Edition (Microcosm Publishing) with a special signing by creators Tom Neely and Gin Stevens along with guest artists Megan Hutchison, Coop, Mari Naomi, Keenan Marshall Keller and more on Tuesday, August 15th at 6pm! Henry & Glenn Forever & Ever: The Completely Ridiculous Edition is a new hardcover edition of four serialized comics and more never-before-published pages than the previous collective edition. Purchase the book at the event on 8/15 to get your copy signed.

Kicking off the celebration will be a live set by

The Glenn Henry Singers are the oldest and most prestigious Misfits Country Western cover band in the greater Los Angeles and high Desert communities. They band is a revolving collection of professional musicians, D list celebrities, legendary drunks and worthless amateurs.

The greatest love story ever told has finally been released in graphic novel form. This epic tome features twenty short stories about the domestic life of "Henry" and "Glenn" and sometimes their neighbors "Daryl" and "John." Digging beneath Glenn's bricks in the front yard, Henry uncovers Glenn's mother. Freshly unearthed, she moves in with him and Henry. Glenn's issues come to the surface as she critiques his art, replaces his wardrobe, scrubs their dungeon, and recalls his childhood. Later, Glenn tries to sell his signature to a UPS driver, takes a punch, and has some daydreaming adventures with a plunger. Henry, "a loud guy with a good work ethic," shows his darker side and indifference to a fan as he drinks black coffee and bonds with Glenn over their distaste for their own bands. These are two men who truly suffer best alone together.

Among other hijinks, Henry and Glenn go to therapy together, battle an evil cult in the forest, and profess their love for each other, all while dealing with jealousy and other normal relationship problems and trying to figure out if their soft-rocking neighbors are actually Dungeons and Dragons playing Satanists. The saga of Henry and Glenn is a true testament to the power of love to overcome even the biggest, manliest egos of our time.

"One of my favorite uses of satire is a comic book that depicts me in a romantic relationship with rock vocalist Glenn Danzig. I have never opened a copy; I am happy to live the rest of my life never knowing what happens to the two of us in those pages. I am told that in the story, our neighbors are Hall and Oates! If I were to find that anything less than hilarious, then I am in the wrong business."  - Henry Rollins, LA Weekly

"I didn't think it was very funny. I thought it was a very crappy, opportunistic book. People are extremely stupid."  - Glenn Danzig, in an interview with Rolling Stone 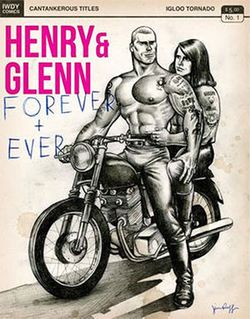 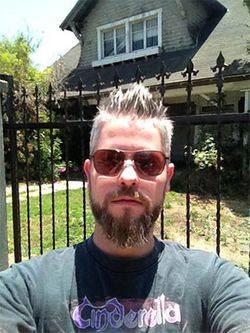