The Buttertones are performing at Amoeba Hollywood Thursday, April 13th at 6pm! Free/all-ages show. Their new album, Gravedigging, is out March 31st on Innovative Leisure. Meet them and get the Gravedigging CD or LP signed by the band after the show.

Playing live at The Observatory in Santa Ana on 4/8.

"It’s rare that a band can cohesively integrate dreamy '50s and '60s rock into the standard garage rock structure with finesse." - The Baitshop

The Buttertones’ Gravedigging is more a movie waiting to happen than an album—or a soundtrack just waiting to inspire a movie, with scene after scene of action, tension and release set to a sound that takes everything good and true about American music before the Beatles prettied it up (surf, sweet soul, the boss saxophone-overdrive garage of the Northwest wailers like the Sonics) and matches it to punk energy, post-punk precision and the kind of personality that blows the circuit-breakers at a backyard party. (Which actually happened, of course.) They’ve even got casting suggestions if anyone wants to start filming—like Willem DeFoe, Winona Ryder, Lucy Liu, and Tommy Wiseau in as many roles as possible. Says guitarist Dakota Boettcher: “We all love movies so much. When you listen to a soundtrack, it has peaks and it has lows, but it’s a whole journey. That’s what we want to do. We want you to go on a journey.”

The Buttertones started their own journey in 2011 as three music school misfits (or drinking buddies, they say) in the heart of Hollywood, happy to learn how to to play, produce and perform but less excited about frequent go-nowhere conversations with classmates who had little interest in either the past or the future of music. So that’s why bassist Sean Redman (also a former member of Cherry Glazerr) felt like he’d lucked out when he found guitarist/singer Richard Araiza and drummer/polyinstrumentalist Modesto ‘Cobi’ Cobiån: “Cobi and Richard were the first guys I met where I thought they knew what they were talking about,” he says. “They had good influences—they weren’t just trying to pander.”

Their first rehearsals were in a Hollywood bedroom where Redman was living on an air mattress, then Araiza finally locked down Boettcher—who he’d often see responding to the same casting calls as he did—to replace another guitarist who was transitioning back to family life even as the Buttertones prepared their debut release, a self-titled cassette on L.A.’s garage-pop Lolipop label. Then they absorbed sax player London Guzmån (formerly in Long Beach’s Wild Pack of Canaries with breakout local Rudy De Anda) after spotting him at a local DJ night, recruiting him for their sophomore album American Brunch—and discovering the kind chemistry they didn't know they were missing. Says Araiza: “We’re proud to be a legit band. It’s a very collaborative process—we rely on each other. I feel that’s rare nowadays, especially with rock bands.”

When it came time to make Gravedigging—the follow-up to a special issue 8” for Innovative, which ended up pulling them aboard the label full-time—they knew it was time to go deeper and get dirtier. Recorded at Jazzcats studio in Long Beach—home-away-from-home to fellow Innovative Leisure artists Hanni El Khatib, Tijuana Panthers, Wall of Death and more—in the spring of 2016, the sessions were supercharged with hard-won live experience from endless street-level shows and relentless midnight-to-six rehearsals at the Buttertones lock-out, then focused even further by the insight and vision of producer Jonny Bell. (“Jonny pushed us like crazy,” says Boettcher. “He had so many ideas all he time.”)

It kicks off with “Pistol Whip” and “Sadie’s A Sadist,” twin tales of love and crime that match outré Dangerhouse Records punk (the dirty surf of the Alleycats, the slash-and-burn sax of the Deadbeats) to an urgent rock ‘n’ roll rhythm section and lyrics about what happens when you get into something you can’t get out of. “Neon Cowboy” is a weird-Western Wall of Voodoo take on that expansive Ennio Morricone soundtrack sound, then “I Ran Away” is heartbroken East Side Story sweet soul and “Geisha’s Gaze” is a sleazy popcorn-style R&B slow burner. It’s zig-zag through the wild parts of music—the kind of road trip that Iggy Pop was on in Repo Man or the kind where Lux Interior picked up Poison Ivy hitchhiking—and it ends with a climax and a cliffhanger both. That's the nervous-but-nasty title track “Gravediggin’,” a pedal-to-the-metal instrumental that goes blasting over the edge of the world into a dazed slow-mo fade, with just enough time between freefall and impact for Araiza to sing, “I've been treading my way through another haze / Tossed my heart to the wind …” Think of it this way: you might not yet know how the band that made Gravediggin’ is going to land—but you know it’s going to hit hard. 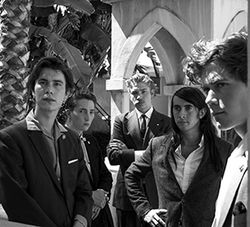 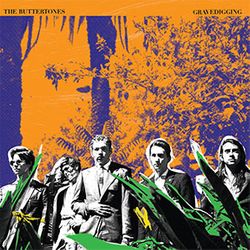