Amoeba Hollywood will be a part of the unique Radiohead worldwide streaming event on June 17th at 6pm. Hear the live stream from Radiohead and receive a limited edition booklet from the band with purchase of A Moon Shaped Pool in-store at Amoeba Hollywood on Friday, 6/17 (while supplies last).

PLEASE NOTE: if you purchased the album at our early sale and listening party on Thursday, 6/16 you will receive separate giveaways (while supplies last). If you want to receive the limited edition artwork from the band, you'll need to purchase A Moon Shaped Pool in-store at Amoeba Hollywood on Friday, 6/17.

Enter Radiohead's A Moon Shaped Pool Competition in-store at Amoeba Hollywood on Friday, June 17 for your chance to win one of three awesome prizes:

A selection of unique figurines used in the making of the Radiohead video "Burn the Witch" directed by Chris Hopewell.

A limited edition screenprint of Stanley Donwood artwork from his A Moon Shaped Pool series.

A 35mm celluloid print of the Paul Thomas Anderson directed video "Daydreaming" in a film canister. 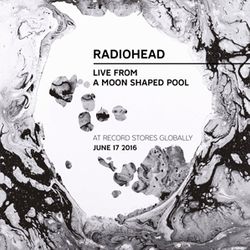