Monkee around at Amoeba Berkeley while we listen to the new album, Good Times! (Rhino Records) with giveaways, gift with purchase of the new album and special treats and surprises - available only for this party!

Good Times! is the Monkees' first collection of original material since 1997, and features new songs by Noel Gallagher, Rivers Cuomo, Ben Gibbard, Andy Partridge and many more – produced by Adam Schlesinger of Fountains of Wayne. It celebrates the group's 50th anniversary and their new tour this summer!

All three surviving band members (Micky Dolenz, Michael Nesmith, and Peter Tork) have written new songs for the album as well as providing vocals and music performances. The unmistakable voice of the late Davy Jones is also included with a vintage vocal on the Neil Diamond-penned "Love To Love." To produce the new album, the band found the perfect musical co-conspirator in Grammy® and Emmy®-winning songwriter Adam Schlesinger (Fountains Of Wayne, Ivy).

Much like The Monkees' early albums, Good Times! features tracks written specifically for the band by some of the music world's most gifted songwriters, including Rivers Cuomo of Weezer ("She Makes Me Laugh"), Ben Gibbard of Death Cab For Cutie ("Me & Magdalena"), Andy Partridge of XTC ("You Bring The Summer"), as well as a song co-written by Noel Gallagher and Paul Weller ("Birth Of An Accidental Hipster").


Good Times! finds all three band members taking turns on lead vocals, playing a wide range of instruments, and sharing new compositions, including Nesmith's "I Know What I Know" and Tork's "Little Girl." In addition to producing the album, Schlesinger also penned "Our Own World" and co-wrote the album's finale with Dolenz, aptly titled "I Was There (And I'm Told I Had A Good Time)."

To help bring the 50th anniversary full circle, The Monkees completed songs for Good Times! that were originally written and recorded for the group during the 60s. Harry Nilsson wrote the title track "Good Times," which he recorded at a session with Nesmith in January 1968. The production was never completed, so the band returned to the original session tape (featuring Nilsson's guide vocal) and have created a duet with his close friend Dolenz. "Good Times" will mark the first time Dolenz and Nilsson have sung together since Dolenz' May 1973 single "Daybreak." Good Times! also includes the Neil Diamond-penned "Love To Love," the Carole King and Gerry Goffin collaboration "I Wasn't Born To Follow," "Whatever's Right," written by legendary songwriting duo Tommy Boyce and Bobby Hart, who were responsible for many of the classic Monkees hits, and "Gotta Give It Time," by Jeff Barry and Joey Levine.


In addition to the new album, Dolenz and Tork will launch a Monkees 50th Anniversary Tour on May 18. The jaunt boasts nearly 50 North American dates through the end of the year including a homecoming gig at the Pantages Theater in Los Angeles on September 16.  Tickets are available now.

During the band's time together, The Monkees amassed a dozen Top 40 hits, including a trio of tunes that soared to #1. Between September 1966 and December 1967, "Last Train To Clarksville," "I'm A Believer," and "Daydream Believer" collectively occupied the top position for 12 weeks. Sales of their LPs were more phenomenal still: The Monkees occupied the #1 position for 13 consecutive weeks, and More Of The Monkees for 18 weeks. Both Headquarters and Pisces, Aquarius, Capricorn & Jones Ltd. went to the top as well, for a four-in-a-row feat in the incomprehensible space of 13 months. The final tally: 16 million albums and 7.5 million singles sold in a mere 2 1/2 years. 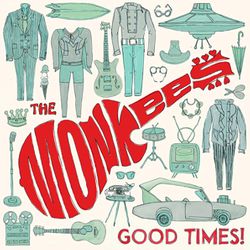