Mini Mansions celebrate their new album, The Great Pretenders (out 3/24), with a live set and signing at Amoeba Hollywood Tuesday, March 24th at 6pm! Free/all-ages show.

Punk is no stranger to the individuals who form Mini Mansions, but neither is melody. While they have all played in various DIY bands throughout their youth, they also share a clear affinity for The Zombies, Gorillaz, and Devo. These three members know how to be imaginative and unorthodox, while having a grasp on the levity in nihilism and love, and the fine line in between. Their new album, The Great Pretenders, will be released on T Bone Burnett’s Electromagnetic Recordings/Capitol Records. They are his first signing.

Mini Mansions came together via the members’ deep personal interconnections, and in the most organic way possible. Drummer/multi-instrumentalist/vocalist Michael Shuman has been playing music with MM bassist/multi-instrumentalist Zach Dawes since age 11. Both Valley kids grew up in Encino sharing their mutual adoration for all things punk rock, which ultimately paved the path for their future musical endeavors. Tyler Parkford, MM vocalist/keyboardist, entered this tight-knit fold after attending University of California Santa Cruz’s film program with Dawes.

With the passing years, each member made his own way: Shuman took to the stage as a teen, first in iconoclastic punk collective Wires On Fire through his current role as bassist in Queens of the Stone Age, Dawes has served as a studio hired gun and has worked with Brian Wilson, Kimbra, and longtime mentor T Bone Burnett (who had Dawes play bass on the recent all-star Dylan collection Lost On the River: The New Basement Tapes), while Parkford releases music under his solo moniker Mister Goodnite.

The Great Pretenders ambitiously reflects the depth, variety, and musical/compositional interplay between these three distinct individuals. It’s also probably the only record you’ll hear this year that features both Brian Wilson and Arctic Monkeys’ Alex Turner as guests – indeed, its entire song cycle teems with that kind of surprising discovery. The Great Pretenders actually represents Mini Mansions’ third release, following its 2010 self-titled debut album (put out on Josh Homme’s boutique indie imprint Rekords Rekords) and the group’s first self-released EP in 2009. Immediately, Mini Mansions starting playing shows with the likes of Them Crooked Vultures, The Kills, and Haim; the group quickly gained a passionate following for distinctly fantastical, colorfully melodic psychedelic-pop confections that expanded on their shared influences. “When we first got together, we agreed on things like late Beatles, Elliott Smith, early Big Star, and Electric Light Orchestra,” notes Parkford. “But after spending three years playing together, other tastes come out.”

This album reveals Mini Mansions’ more urgent side. “Love, death, and existentialism are the big themes here,” says Shuman, “and that’s reflected in how the songs sound.” Those qualities come out in the upbeat-but-questioning “Freakout!” and the nervous rocker “Fantasy” – both of which reveal a love for ‘80s New Wave angst-pop hooks. “It's a sound that lets you know things are not okay, but you can dance to it and hum the chorus,” says Parkford. “It creates this awkward anxiety that you just want to revel in.”

The album also finds Mini Mansions coating its signature hooky psychedelia with a fresh dusting of glitter. “Heart of Stone” builds from intimately acoustic to trippily symphonic, dancing between Hunky Dory-era Bowie and ELO; likewise, the glam-rock ballad “Creeps” which comes by its Mark Bolan-esque fuzz guitar solo naturally. “That guitar tone is Michael playing straight into the console – which is the same exact mixing board T. Rex recorded Electric Warrior on,” says Dawes.

Mini Mansions was able to expand its sound on The Great Pretenders thanks in part to an extended gestation. Conceived and written over the last two and a half years, The Great Pretenders was largely recorded at Woody Jackson’s Vox Recording Studios. The oldest privately run recording studio in the world and an L.A. institution, Vox proved the perfect playground for Mini Mansions’ members, who found themselves doubly inspired by studio’s treasure trove of vintage equipment and instruments.

That exploratory spirit boiled down to the album’s guest collaborations. “Any Emotions” came to feature Brian Wilson after Dawes played bass on a session for the Beach Boys guru’s new album; the final result finds Wilson magically imbuing the track with his trademark voice and haunting melodicism. “Brian and I had a good rapport after the first session I did for him,” Dawes says. “When I asked him to work with us, he gave more than any of us had anticipated, I guess that’s why he’s Brian Wilson – it still feels a little surreal.” Alex Turner, meanwhile, adds a brilliant verse “Vertigo,” which, with its Wu Tang-style strings and G-funk breakbeat, “is essentially our take on a hip-hop song. We thought it would be cool to have this kind of Mark E. Smith-style, British thug thing on a track like that. We’d become close to Alex, so it was a no-brainer – but what he did was still way beyond our high expectations.”

When Mini Mansions had completed work on the record, T Bone Burnett immediately signed it to Electromagnetic, the imprint he runs via Capitol Records. “I’ve worked with T Bone for years,” Dawes says. “He's a great friend, boss, mentor, confidante, ambassador – and a serious artist. His co-sign means everything.” “T Bone and Capitol fully trusted in us, and gave us full reign to do what we wanted,” Shuman adds. “When we first started, we were trying to figure out what kind of band we wanted to be. Now that we know who we are, we just want to get these songs out there, and give them the best shot possible.” 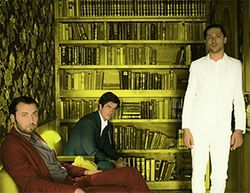 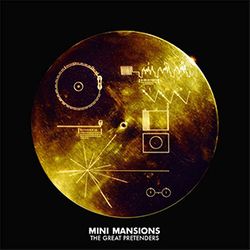