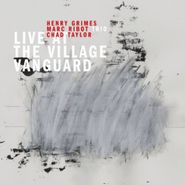 Whenever I am looking for recordings, I pay as much attention to the record label as I do the musical artists. Pi Recordings has a reputation for releasing innovative music by many modern jazz composers and improvisers. Guitarist Marc Ribot is joined by jazz veteran Henry Grimes on bass with the cross-genre drumming of Chad Taylor. In rock music this would be considered a power trio. With the inclusion of Grimes’ upright bass, it leans toward the tradition of semi-free, adventurous and lively jazz.

Even though this release features music penned by modern jazz composers such as Albert Ayler and John Coltrane, it also shows an interest in a couple of evergreen tunes such as Old Man River and I’m Confessin’ (That I Love You). These later two pieces are taken with expressive liberty but are still recognizable. For those looking for a jazz guitar record, Marc Ribot does not follow the standard jazz guitar vocabulary. His playing has frequently been associated with avant-rock and could be heard as the east-coast version of Nels Cline.

In my listening experience of jazz, I have noticed that some musicians such as Django Reinhardt and Les Paul cannot sound relaxed no matter how slow the song. Marc Ribot also falls squarely in this style. Both of the standards here are known for their relaxed pacing. With Ribot’s group, the slow songs still possesses a beaming energy and an indication that anything can happen.