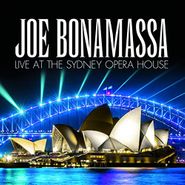 As one of the most popular of the current crop of blues guitarists, Joe Bonamassa has garnered enough adoration to play many of the premiere performance spaces around the world. His latest live document of his world domination, Live At The Sidney Opera House, chronicles his 2016 visit to the iconic venue, performing songs from his then current album Blues Of Desperation. Fans of Bonamassa's brand of slide and finger picking will find much to tide them over until his next chart-topping studio release.