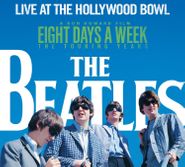 Finally remastered, and released in conjunction with Ron Howard's documentary, Eight Days A Week: The Touring Years, Live At The Hollywood Bowl pulls from The Beatles' famed 1964 and 1965 performances at the iconic venue. Not only is this record a document of the band in the prime of their early years, but it also functions as a document of the hysteria of Beatlemania, with the squeals, tears and cheers from the crowd almost as present as the music itself. Crank it up and hear The Fab Four at their most rockin' and raw!