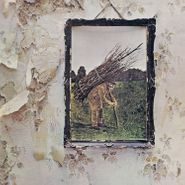 Too much has been written about Led Zeppelin’s untitled fourth album. It’s songs have so permeated every pore of popular culture that it’s nearly impossible to think of it with a clear head. But its ubiquity should not count against it. This is as wonderful and album to revisit as it is to discover for the first time. It is the sound of four of the greatest rock musicians of all time at the height of their powers. People who don’t listen to this are depriving themselves of rock ‘n’ roll’s greatest thrill ride. “Black Dog’s” heavy blues strut is flat out audacious. It’s a double shot of whiskey at the beginning of the night. No car commercial could ruin “Rock And Roll’s” pure power. Has there ever been so concise, so exacting, so perfect a rock drum performance as John Bonham’s on this song? Though on any other album, medieval canticle “The Battle of Evermore” would seem a misplaced momentum killer, but it is a breath of fresh air after the first two full-throttle tracks. And it perfectly introduces “Stairway to Heaven,” a song so massive, so ambitious and so complete that it almost warrants its own album. You could say the song is overrated and be right, and it would still be undeniably great. But “Stairway to Heaven’s” only crime is that it so towers over everything that it threatens to dwarf the rest of Led Zeppelin IV, which is equally wonderful.

This album doesn’t even need “Stairway to Heaven.” To me, the song doesn’t compare with the two that immediately follow it. “Misty Mountain Hop” focuses all of Led Zeppelin’s estimable kinetic energy into a singular three-note boogie that absolutely pulverizes. That moment when Robert Plant pulls back and Jimmy Page lays harmonic notes over it and the whole band falls into complete lockstep is so exciting that it makes you feel happy to be alive when you hear it. John Bonham’s rumbling beat and Plant’s absolutely possessed vocals on “Four Sticks” are hypnotic, spiritual even. On an album that is perfectly paced, “Going to California” again provides a breather. It is a simple yet emotionally pleasing folk song befitting of Joni Mitchell, something that showed the band could write delicate songs alongside massive rock epics. And “When the Levee Breaks,” the album’s final track, serves a similar purpose to “Stairway to Heaven” but is better, combining all of the bands strains into a psychedelic jam that explodes into the auditory equivalent of fireworks. Every aspect of Led Zeppelin IV feels triumphant. It’s a piece of music that feels blessed, so moving, so accomplished that it makes you feel like that you could do anything.

Like these other Led Zeppelin reissues, the bonus tracks feel essential as well for a number of reasons. Firstly, these are songs many of us have heard so many times that hearing them differently helps us re-appreciate them. Secondly, audiophiles and musicians get to hear these songs taken apart and stripped down a bit, unraveling some of the mystery. And finally, it’s just more Led Zeppelin, something we could all use. Whereas some artists’ outtakes could feel like filler, these alternate versions from one of the greatest albums even count as essential listening for fans.