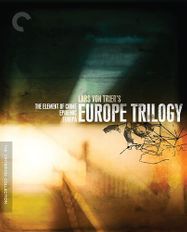 Three-disc set includes: The Element Of Crime (1984)In a drab, post-apocalyptic Europe, a diabolical slaughterer of little girls eluded an obsessed police detective (Michael Elphick). Agreeing to submit to hypnosis to crack the crime, he might learn more than he cares to. Lars von Trier's debut feature, shot entirely in sepia tone and in English, also stars Esmond Knight, Me Me Lai, Jerold Wells. 104 min. C/Rtg: NR Epidemic (1987)Provocative Danish horror film focuses on a director and a writer who find their lives thrown into turmoil after they create a script about a mysterious plague. When a real epidemic that eerily parallels the one they invented begins sweeping throughout Europe, the pair begins to question reality as they realize that things might not be what they appear. Lars von Trier (who also directed and co-wrote the story), Udo Kier, Svend Ali Hamann star. 106 min. In English and Danish with English subtitles. BW&C/Rtg: NR Europa (1994)Set in Germany shortly after World War II, this visually sumptuous, noir thriller from director/co-writer Lars von Trier focuses on a naive young American man of German heritage who takes a job as a railroad conductor and becomes involved with a woman who may be part of a pro-Nazi group of terrorists. Jean-Marc Barr, Barbara Sukowa, Udo Kier, and Eddie Constantine star. AKA: "Zentropa." 107 min. In English and German with English subtitles. BW&C/Rtg: R Widescreen; Soundtracks: Danish, English; Subtitles: English; audio commentary; featurettes; theatrical trailers; more. In Danish with English subtitles.