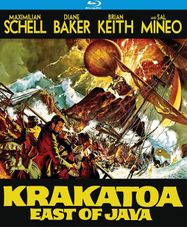 The Epic Adventure that Shook the Earth to its Core! In Singapore harbor, 1883, Captain Chris Hanson (Maximilian Schell, Judgment at Nuremberg) of the Batavia Queen embarks on a perilous search for sunken treasure off the island of Krakatoa. To find a fortune in rare pearls, he must brave a boiling sea, douse an uprising by a horde of convicts, and outwit a greedy crew desperate for more than their fair share... only to confront the most devastating and catastrophic volcanic explosion the modern world has ever felt creating giant tidal waves that engulf the island and endanger all aboard the Batavia Queen. TV veteran Bernard L. Kowalski (Stiletto) directed this widescreen spectacle that featured a splendid cast that included Diane Baker (The Silence of the Lambs), Brian Keith (The McKenzie Break), Sal Mineo (Rebel Without a Cause), Rossano Brazzi (South Pacific), John Leyton (The Great Escape), J.D. Cannon (Cotton Comes to Harlem) and Marc Lawrence (Custer of the West) with a rousing score by Frank De Vol (The Dirty Dozen).