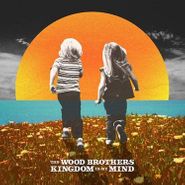 Country-folk trio The Wood Brothers boast a talented pedigree with serious musical chops (including Chris Wood from noted ‘90s avant-jazzers Medeski Martin & Wood), but as a three-piece their sound is fundamentally stripped down. Titular bros Oliver and Chris Wood play guitar and upright bass respectively, while multi-instrumentalist Jano Rix filling in on anything from drums to melodica. Though the talent of the group affords them musical flexibility, they tend to hem fairly true to their folksy roots. Kingdom In My Mind is the Wood Brothers’ first album in a while to embrace that intrinsic element of the band from a production standpoint. Instead of the overly polished treatment that tends to be given to studio acts of the ilk replete with impeccably recorded instruments fed into cavernous reverb chambers, Kingdom presents the band in an authentic light, the way any dusty folk ensemble ought to be heard. The production is dry and warm, conjuring an intimate atmosphere that befits an album so saturated in classic Americana.