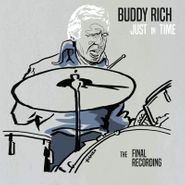 Buddy Rich's final performance at Ronnie Scott's in London was in November of 1986, and the magic of that swinging set is now available on Just In Time: The Final Recordings. The players are impeccable and include Rich's daughter Cathy on vocals for “Twisted” (Annie Ross); she also wrote the album's liner notes. Ronnie Scott introduces Rich as “the world's greatest drummer” and the 70-year-old legend does not disappoint with on-point energetic numbers like Sammy Nestico's “Wind Machine” and Freddie Hubbard's “Up Jumped Spring.”