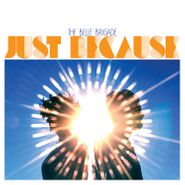 On their second album the sibling grandkids of "Imperial March (Darth Vader's Theme)" composer John Williams explode with more experimental percussive pop, drenched in their trademarkedly complex vocal harmonies. It's been three years since their self-titled debut and on Just Because, they reflect a new Californian sound, equal parts Laurel Canyon and global pastiche. Recommended.