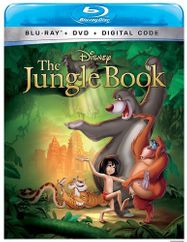 The last cartoon feature overseen by Walt Disney himself, this animated adaptation of Rudyard Kipling's 1894 classic follows young "man-cub" Mowgli and his animal mentors, Baloo (voiced by Phil Harris) the bear and Bagheera (Sebastian Cabot) the panther, in the Indian jungle. With the imminent arrival of the man-eating tiger, Shere Khan (George Sanders), Mowgli's friends try to convince him to return to his own kind in the "Man-Village." Other voices by Bruce Reitherman, Sterling Holloway. Songs include "The Bare Necessities" and "I Wanna Be Like You." 78 min. Widescreen (Enhanced); Soundtrack: English