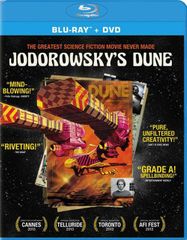 In 1975, director Alejandro Jodorowsky began work on his most ambitious project yet. Starring his own 12-year-old son alongside Orsen Welles, Mick Jagger, David Carradine and Salvador Dali, featuring music by Pink Floyd and art by some of the most provocative talents of the era, including H.R. Giger and Jean "Moebius" Giraud, Jodorowsky's adaptation of the classic sci-fi novel Dune was poised to change cinema forever.