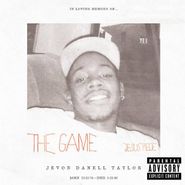 From the outset it’s clear that The Game isn’t messing around on Jesus Piece. After the lackluster R.E.D. Album, Jesus Piece begins with Dario Argento film style keys and heavy rhymes by Game and Meek Mill on “Scared Now.” 2 Chainz and Rick Ross lend their vocals to the Kanye West-ish “Ali Bomaye,” moving into the title track, which does feature West as well as Common in a welcome cameo on a skittering track full of reflection and gratitude for his career as well as to Jesus, stating the album’s religious themes. This comes into play on the next track, the cloud rap-style “Pray,” one of several tracks successfully finding Game updating his style to reflect current trends. Occasionally Jesus Piece is too trend-hoppy and riddled with guest spots such that Game himself is a bit lost in the mix, but for the most part Jesus Piece succeeds through its thematic consistency — the bells on “Church,” for instance, producing a fine counterpoint for its lyrics’ conflicted nature — and for its lyrical content, which highlights the hypocrisy in living a gangster lifestyle while attempting to stay true to Christian values. Not only does Jesus Piece proves Game is still relevant musically, it proves he can stay current while having something interesting to say, as well.