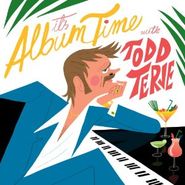 Todd Terje is already one of the most well-respected DJs around, having released dancefloor anthems like “Snooze 4 Love” and “Inspector Norse.” But what happens when “it’s album time”? The answer is the party album of the year. With his goofy moustache, leisure-suit persona and cool jazz tones, Terje’s aesthetic is perfect, and It’s Album Time is packed with jammers. “Leisue Suit Preben” moves on a stocky beat, like the world’s worst detective sleuthing around, until cinematic strings and an ’80s car-chase synthesizer pick up the intrigue. Next for the album’s Preben character is Mexico, as “Preben Goes to Acapulco” features wonderous synth explosions worthy of a Disneyland light show. “Svensk Sas” makes us tango in the night, and “Strandbar” is the killer pool-party song we’ve been looking for all of our lives. While It’s Album Time could be the suddenly cool soundtrack for some forgotten ’80s B-movie, it also feels incredibly relevant and current, pulling a similar feat to Daft Punk’s Random Access Memories. It makes us want to put on our shades, hop in a Delorean and never look back.