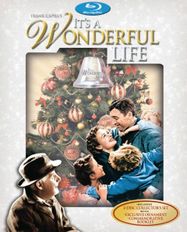 Somehow I never got hip to It’s A Wonderful Life until more recent years. Though it’s been a Christmas season staple ever since the 1970s when its copyright fell into the public domain, it managed to elude me my entire childhood. I think I may have blown it off as corny or lightweight, but I couldn’t have been more wrong. It’s A Wonderful Life, besides being incredibly moving, has themes that still pack a wallop.

On first viewing it may take some nudging to get past the set up concerning stars talking and angels and what not. The Our Town piece of Americana, its lovable small town, seems overly cliched at first glance until you realize this is the movie that invented it. There is a reason these ideas are now called "Capraesque." This and other films (Mr. Smith Goes To Washington, Meet John Doe, etc.) established director Frank Capra and his wholesome characters whose decent values can take on the world as a style all its own. And then the great Jimmy Stewart enters the picture and anchors it with an epic performance.

As George Bailey of the town of Bedford Falls, Stewart starts out as an adventurous young 20-something dreamer about to set out on a trip for Europe until his father passes. Then the bank crashes of the late '20s leave him stuck at home with more responsibilities than he ever wanted. George loses his dreams when he gets stuck working in the family bank business with his goofy uncle Billy (Thomas Mitchell). Passing up on a "chance of a lifetime" business opportunity, he instead marries Mary (Donna Reed) and has a ton of kids. He becomes even more invested in Bedford Falls, the place he once dreamed of leaving, and the town becomes even more indebted to him as it's slowly being swallowed up by Mr. Potter (Lionel Barrymore) and George becomes the one thing standing between the good people of Bedford Falls and the greedy slumlord. After some serious mishaps, George grows depressed and suicidal. Before attempting to jump off a bridge he is visited by an angel named Clarence (Henry Travers) and is shown what Bedford Falls would have become (with strip clubs and beer halls) had he never existed. He realizes it’s a wonderful life indeed.

Along with Vertigo, It’s A Wonderful Life may be Stewart’s signature performance, but with so many great roles and so many phases to his amazing career it’s hard to choose. You have his earlier Capra hit, Mr. Smith Goes To Washington; his '40s comedies, Philadelphia Story (his Oscar winner) and Harvey; his Westerns, The Man Who Shot Liberty Valance (half the film the 50-something Stewart plays a fresh outta college kid) and Winchester '73 (all of his underrated others with director Anthony Mann); his Hitchcock films, Rope, Rear Window, and Vertigo; and then maybe my favorite Stewart flick, the Otto Preminger courtroom epic, Anatomy Of A Murder. It’s a Wonderful career.

Just as it is unfair to compare apples to oranges or Charlie Chaplin to Buster Keaton, so is the comparison of director Capra to his edgier, but less celebrated contemporary Preston Sturges. Both employed an impressive stock company of character actors and both were on the cutting edge of comedy, though Capra’s career went even further back to the silents before his breakthrough, It Happened One Night, in 1934. Sturges was a product of the 1940s. By the end of the decade both would be all but washed up. Sturges' brand of cynical comedy would morph into the work of Billy Wilder and other more complicated creators, while Capra’s more hopeful style would be considered passÃ©. It’s A Wonderful Life was not well received in its day and would help to put the nail in Capra's coffin (though a few years later he would have a mini-comeback with State Of The Union).

The more one views It’s Wonderful Life, and perhaps the older one gets, the deeper the affect the film has on the watcher. The politics are rather astounding, products of the depression era '30s rather than the communist scared '40s. George misses out on the big money but builds a neighborhood for the poor to live, even though he knows he won’t make a dime from it. This is a film about the modesty of the American dream. George’s house and others may be shabby, but they own it. George needs to learn that having people who love him and depend on him is just as spectacular as the adventures and larger than life accomplishments he thought he would have. His growth requires a Kafkaesque nightmare to learn it, like King Lear running mad or a twisted take on A Christmas Carol, this is a holiday film unlike any other.

It's A Wonderful Life has had just that. With the endearing message that "no one is a failure who has friends," Frank Capra's heartwarming masterpiece continues to endure, and after 60 years this beloved classic still remains as powerful and moving as the day it was made.