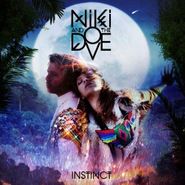 Niki & the Dove are from Sweden. They sound like Stevie Nicks and Kate Bush singing with The Knife. So you should probably stay away from this record if you don't like any of these things. I was a bit disappointed in the new Ladyhawke album this year. Because I really loved that first album. So Niki & The Dove sort of took their place in my Top 50 of 2012. The album is pure fun dancey pop music. But with some arty Kate Bush type songs thrown in there.

Niki and the Dove create a sort of fantasy pop on Instinct. It sounds beamed in from an alternate futuristic universe of space tribes and robotic unicorns. In a more corporeal sense, the electronic pop duo drum out tribal beats electronically and unleash claustrophobic chants on “The Gentle Roar,” one of their strongest tracks. Vocalist Malin Dahlström sounds lost in the forest of metallically lush sounds created by keyboardist Gustaf Karlöf on “Mother Protect.” She comes on like one of Prince’s many protoges on the slow funk of “Last Night,” singing intoxicatingly, “last night we got married in a back seat.” Niki and the Dove share some qualities with their Swedish brethren — the warped, chirpy vocals of The Knife/Fever Ray; the space-age disco of Robyn; the alternately dark and naive introspection of Lykke Li; and yes, the operatic drama of Welsh band Florence & the Machine. However, lyrically and vocally, Dahlström harkens back to Kate Bush and Stevie Nicks in a truer sense than some of her contemporaries — when she’s left spinning through a digital wilderness among the lovely surroundings of “Tomorrow,” you feel like you’re out there with her.