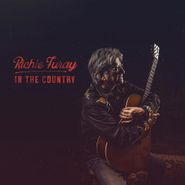 Buffalo Springfield and Poco founding member Richie Furay infuses his first studio album in seven years with his legendary passion for country-rock. In the Country is a covers album steeped in the grand traditions of the genre, with Furay adding his voice to classics like Garth Brooks’ “The River,” Alabama’s “I’m in a Hurry and Don’t Know Why,” and Buddy & Julie Miller’s “Chalk.” Recorded at Nashville’s Blackbird Studio by GRAMMY-winning engineer/producer Val Garay (Linda Ronstadt, Kim Cares, Neil Diamond), Furay was backed by world-class session musicians and joined by John Berry, Vince Gill, Jason Scheff (Chicago), and Timothy B. Schmit (Poco/Eagles) on a series of duets. The album they made together is warm, authentic, and thoroughly delightful.